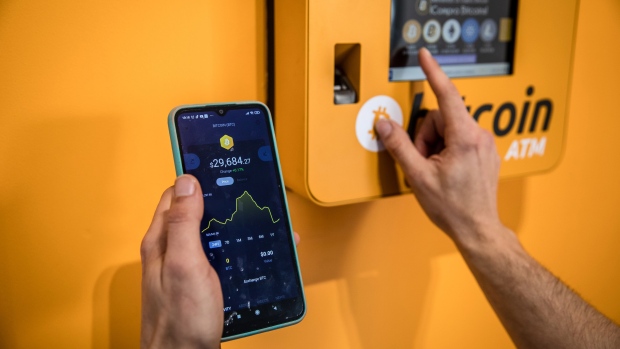 A customer inspects a Bitcoin price chart whilst using a cryptocurrency automated teller machine (ATM) inside a BitBase cryptocurrency exchange arranged in Barcelona, Spain, on Monday, May 16, 2022. The wipeout of algorithmic stablecoin TerraUSD and its sister token Luna knocked more than $270 billion off the crypto sector’s total trillion-dollar value in the most volatile week for Bitcoin trading in at least two years. , Bloomberg

(Bloomberg) -- The European Union late Thursday reached a provisional agreement on its landmark Markets in Cryptoassets (MiCA) directive, bringing years of debate on how to regulate the digital-asset industry to an informal close.

The key legislation will regulate the crypto sector with common rules across all 27 member states, marking the first time globally that lawmakers have attempted to supervise the sector on such a scale.

The European Parliament, Council and Commission approved new provisions on the supervision of cryptoasset service providers (CASPs), consumer protection and environmental safeguards for cryptoassets, including cryptocurrencies like Bitcoin and Ether. The European Securities and Markets Authority, or ESMA, will be responsible for oversight of the industry, while a new legal framework will seek to regulate public offers of cryptoassets to protect market integrity.

Nonfungible tokens that are offered to the public at a fixed price, such as for tickets to an event or as an item inside a video game, will be exempt from the new rules — though the Parliament said these could be introduced under MiCA’s scope at a later date. NFTs were a prominent point of disagreement among member states in discussions before Thursday’s final round, according to people familiar with the talks.

Money laundering concerns were also addressed, with ESMA to be put in charge of a public register where all non-compliant crypto providers who offer services without authorization will be listed.

Other sticking points were whether cryptoasset service providers (CASPs) should be required to be based in the EU and how to address the environmental impact of cryptoassets, the people said, asking not to be identified discussing confidential information.

Stefan Berger, the European Parliament’s representative on MiCA, said in a statement that the approved directive included an agreement that cryptoasset providers should disclose the energy consumption and environmental impact of the assets they choose to list, using the bloc’s regulatory technical standards as a basis.

First presented in 2020, MiCA went through several iterations before it reached this point, with some proving more controversial than others. An earlier draft of the legislation included a clause that sought to effectively ban Bitcoin and other cryptocurrencies created using the energy-intensive proof-of-work mining process, but it was later scrapped following major industry backlash.

Ernest Urtasun, shadow representative on MiCA and a member of Parliament for the Greens, said the final version of the directive mandated co-legislators to take into account the environmental impact of cryptoassets in a future review.

“We wanted more ambition,” Urtasun said in a statement after talks had concluded. “However, we see the compromise as a first step that will lead to fundamental changes to the sector in the next review.”

Several countries including Lithuania, Ireland and Hungary had opposed the inclusion of NFTs under MiCA in earlier discussions held on Wednesday, the people said, though some were willing to accept NFTs should they be allowed to add in a review clause. The Parliament and Council also reached a provisional agreement late Wednesday to force CASPs to provide identifying information on all digital asset transactions, under the so-called transfer of funds regulation.

The crypto industry has broadly embraced MiCA’s proposed regulations, having voiced a need for boundaries within which they could safely operate their businesses.

“Europe’s upcoming cryptoassets policy framework will be to crypto what GDPR was to privacy,” said Dante Disparte, chief strategy officer at stablecoin issuer Circle Internet Financial, in comments made before the MiCA agreement. “Namely, a harmonized, comprehensive framework, across an entire region, that gives market participants regulatory clarity -- something they have long asked for -- and crypto end-users key projections and market-wide assurances -- something they need.”

The provisional agreement reached by the political negotiating teams will now move to be approved by the Economic and Monetary Affairs Committee, followed by a plenary vote. The Council must also approve the deal before it can come into force.

(Updates with context from the European Parliament, in third paragraph and throughout)