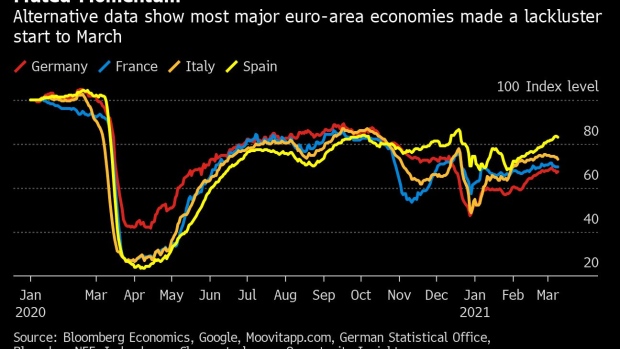 (Bloomberg) -- The European Union’s pandemic recovery fund has run into early trouble, with the bloc’s executive arm judging that most of the national spending plans submitted so far still need work to get approved, raising the risk of delays in disbursements to some of the region’s battered economies.

Germany’s submission is among those deemed to fall short of expectations, with southern European nations including Greece and Spain having the strongest plans, according to officials familiar with the discussions who asked not to be identified. Some countries haven’t made proposals at all yet, and others are way behind, they said.

The German government is in talks with the Commission to reduce some of the hurdles to investment in its plan, one official said.

A commission spokeswoman said that staff are in “intensive dialogue” with member states with the aim of making disbursements starting from mid-2021, but that “it is also essential” that these plans meet the key objectives of the fund.

A spokesperson for the Greek government also declined to comment, and spokespeople for the German finance ministry and Spanish government didn’t immediately respond to a request for comment.

The slow progress with the 750 billion-euro ($893 billion) fund threatens to slow the region’s recovery. For money to be distributed this summer as planned, proposals need to be cleared in April and some countries risk missing that deadline.

It highlights how the EU is lagging behind other advanced economies. The bloc is already struggling to step up coronavirus vaccinations and extended lockdowns mean its running at only about 95% of its pre-pandemic output.

In contrast, the U.S. this week passed a $1.9 trillion fiscal stimulus package that will see cash reaching citizens’ bank accounts within days. The EU economy is only likely to reach its pre-pandemic size in 2022, a full year after the U.S.

The national spending plans are subject to approval by the Commission and a weighted majority of EU member states. The disbursements are contingent on the money being used to finance investment for climate-friendly projects and digital transformation, as well as on structural economic overhauls in areas including the labor market and the pension system.

Ongoing talks focus on what counts as green and digital investment, while the Commission demands a greater focus on structural reforms.

The Commission is insisting on strong spending plans because of the exceptional challenges facing the bloc, one of the officials said. Its insistence on making disbursements contingent on the letter of the terms agreed by EU leaders last summer has irked some governments eager to get the cash flowing as soon as possible, according to one official.

The recovery fund was passed last year in tortuous negotiations by the 27 member states, with the final agreement for a fund backed by commonly issued debt -- a first for the bloc -- reached only on condition that this is a one-time tool.

Still, the Commission sees it as a test case for a permanent future funding facility, which explains the EU executive’s insistence on securing that the money is well-spent, according to one official.

The European Central Bank has long said the region needs a permanent joint fiscal capacity to smooth out economic divergences. Some nations back that view, while some wealthier countries fear it would lead to their taxpayers repeatedly providing financial support to weaker economies.