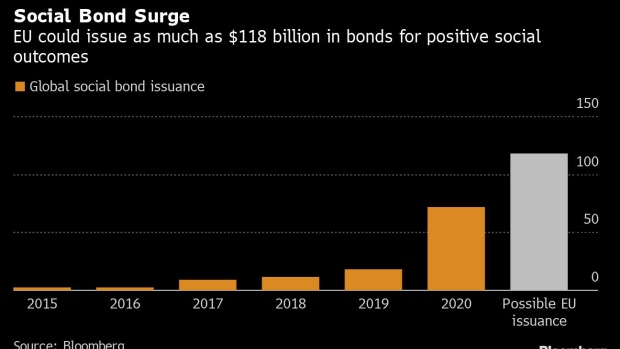 A European Union (EU) flag flies outside the Berlaymont in Brussels, Belgium, on Wednesday, Oct. 7, 2020. As the Brexit talks enter their final critical few weeks, officials on both sides are voicing doubts over whether they can get a deal over the line. Photographer: Geert Vanden Wijngaert/Bloomberg , Bloomberg

(Bloomberg) -- A new player is set to make a big splash in the niche pool of sustainable debt this month, a market where investors can’t get enough of new offerings at the moment.

The European Commission will sell its first social bonds as soon as next week, tied to a regional job support program called SURE, to counter the devastating impact of the coronavirus. That comes as such sales have recently enable borrowers to lower costs, even on top of a slide in rates driven by investor demand for havens.

While such environmental and social debt only makes up an estimated 2% of the euro-area market, the pandemic has turned social bonds into the fastest-growing corner of sustainable finance. Europe could sell 10 billion euros ($11.7 billion) a month, according to Commerzbank AG, to achieve 100 billion euros by next year -- almost the size of total global issuance so far.

“The EU looks set to become the largest issuer of sustainable instruments on the planet,” said Commerzbank strategists including Michael Leister in a note. The bloc also plans 225 billion euros of green debt, though that’s unlikely before next year.

Yields on the safest euro-area debt have fallen toward March’s lows following a resurgence of the pandemic, while rates have already hit all-time lows in peripheral nations from Ireland to Greece.

The parameters of the European Central Bank’s pandemic bond-buying program should ensure the new social debt already has a “substantial” buyer, the Commerzbank analysts said. Other investors should be attracted to the additional premium on offer over similarly AAA-rated German bonds, they added.

Ratings decisions will also be in focus next week, given S&P Global Ratings will judge Italy, Greece and the U.K. The main question is whether Italy will stay two notches above junk, since S&P is the outlier at one level higher for the euro area’s second-most indebted nation than given by both Moody’s Investors Service and Fitch Ratings.

Societe Generale SA sees 30% odds of a downgrade next week and suggests investors take a cautious stance. It recommends buying Italy’s 10-year debt and selling its German counterpart only when the spread rises to around 150 basis points, from around 130 now.

The U.K. will hold two regular gilt auctions and one inflation-linked bond sale, selling up to 4.6 billion pounds, and the Bank of England will buy back 4.4 billion pounds of debt in three operations.