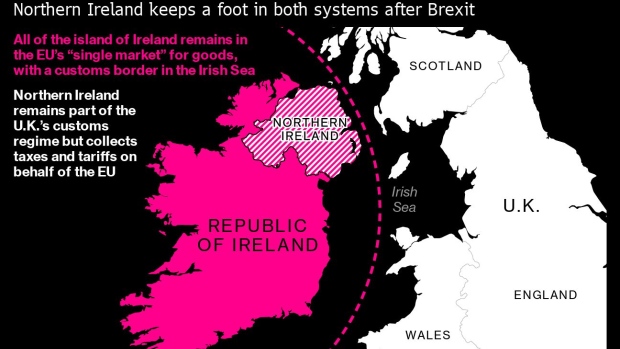 (Bloomberg) -- The UK’s plan to override the part of the Brexit deal governing trade in Northern Ireland won’t work, the EU’s chief Brexit negotiator Maros Sefcovic said Wednesday, stressing that the bloc wants an “enduring” partnership with Britain, and won’t contemplate establishing a hard border on the island of Ireland.

Speaking at Bloomberg’s London office on Wednesday evening, Sefcovic said the EU can’t accept Britain’s efforts to “unilaterally and illegally” disapply the arrangements in the Brexit deal that keep Northern Ireland in the bloc’s single market while creating a customs border with the rest of the UK.

How Johnson Is Taking UK Into New Trade Rift With EU: QuickTake

“It’s not for London to unilaterally change the game and decide what goes into the EU single market,” Sefcovic said. The UK plan, he said, will lead to “constant uncertainty.”

Sefcovic’s comments underline the deterioration in the EU-UK relationship since Prime Minster Boris Johnson’s government earlier this month introduced a bill into Parliament to allow ministers to rip-up the regulatory framework both sides agreed to in 2019 and replace it with new rules on customs checks, tax and arbitration. The EU responded by restarting legal proceedings against the UK, and hasn’t ruled-out a potential suspension of the trade agreement if the bill becomes law.

In a dig at Johnson’s slogan in the run-up to the UK’s last general election in 2019, Sefcovic opened his speech saying “it’s high time we got Brexit done.” Then, in a conversation with Bloomberg TV’s Guy Johnson, he said he wanted a “genuine negotiation” with the UK, rather than “window dressing.”

The UK legislation would separate goods flowing between Britain and Northern Ireland from goods intended for the EU into green and red channels, and allow businesses in Northern Ireland to choose whether they follow UK or EU standards, or both. It would also extend UK subsidy controls and tax breaks, including changes to value-added tax, to Northern Ireland, and strip the European Court of Justice of its role in settling disputes in the region over the Brexit deal.

Johnson has said he wants the legislation to complete its passage through Parliament by year-end, though it’s likely to face opposition in the House of Lords, which could delay its progress. The bill passed its second reading in the House of Commons this week.