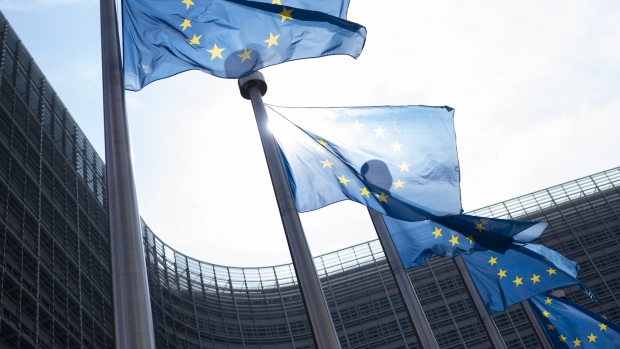 European Union (EU) flags fly from flag poles outside the Berlaymont building ahead of a European Union leaders summit in Brussels, Belgium, on Wednesday, April 10, 2019. At a crisis summit today, EU leaders will probably deny U.K. Prime Minister Theresa May the short Brexit extension she was seeking and instead force a delay of as long as a year. Photographer: Jasper Juinen/Bloomberg , Bloomberg

The European Union’s top economic officials warned that the bloc’s 750 billion-euro (US$826 billion) recovery package won’t give countries blank checks, as grants and loans will be conditional on the implementation of reforms and will have to focus on the region’s green and digital priorities.

A day after the European Commission proposed an unprecedented stimulus plan to help the bloc’s economies weather the virus-induced recession, Vice President Valdis Dombrovskis and Economy Chief Paolo Gentiloni set out the terms under which the 27 member states would be able to benefit from the funds.

At the heart of the plan is the so-called Recovery and Resilience Facility, a 560 billion-euro tool designed to provide large amounts of money to finance investments and reforms in order to help economies rebound. But to access the funds, EU governments will need to prepare plans setting out their reform and investment agenda up to 2024.

If the plans are approved, the commission will disburse the grants and loans in installments upon the completion of certain milestones that the countries will have proposed themselves.

For some EU capitals, linking portions of money to the completion of certain prerequisites may bring back memories of the region’s painful bailouts, where the disbursement of desperately needed loans was tied to the implementation of tough austerity measures.

The officials stressed that this process will involve nothing like the close scrutiny and strings attached seen in crisis-era bailouts like the ones for Greece.

“Our intention is not to make it a heavy bureaucratic exercise,” Dombrovskis said in an interview with Bloomberg. “What we want to see that these recovery and resilience plans are in line with the challenges identified for member states and in line with overall European policy.”

Despite his reassurance, these terms may not go down well in capitals like Rome, which has been in a perpetual push and pull with Brussels over its annual budget plans and where politicians have traditionally been loath to cede any more powers over their economic policy to the EU. To others, the need for the proposed investments and reforms to significantly address Europe’s green and digital ambition may also be tricky, as their economic policy focus lies elsewhere.

The commission’s recovery plan, however, will ultimately require the backing of all EU members, and attaching some conditions to these grants and loans may be key in order to bring budget hardliners like Austria, the Netherlands, Sweden and Denmark on board.

The so-called Frugal Four did not shoot down the proposal, signalling they are willing to discuss a compromise, even as they are keen to ensure their taxpayers are not left on the hook in the future. But they are expected to put up a fight on various aspects of the package including its total size as well as the ratio of loans to grants.

While negotiations between the bloc’s 27 governments are expected to be tense and are likely to water down the commission’s proposal in order to be palatable to all sides, Dombrovskis remained optimistic that countries would back the plan as they all recognize that the EU is facing a serious challenge and are all suffering from the recession.

“We hope that the spirit and ambition in this proposal is going to be maintained, because the current situation and financing needs of our economy require it."