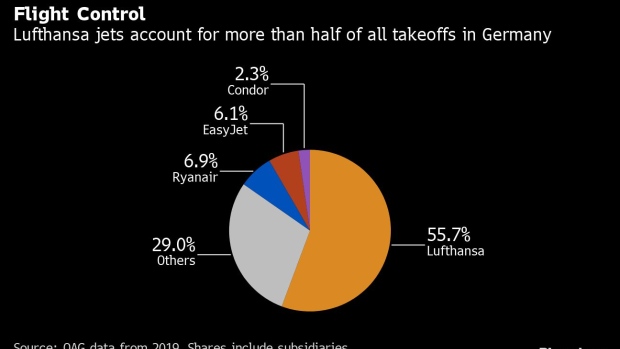 Rejecting criticisms from Lufthansa’s supervisory board over the proposed 9 billion-euro ($10 billion) rescue of Europe’s largest airline, Margrethe Vestager said Friday she isn’t “creating extra hurdles” by requiring cutbacks when the state takes a stake in companies.

“Lufthansa is indeed a very impressive company and they have market power,” Vestager told reporters at a Brussels press conference. “There is a high risk that if you hold market power” that “competition will be disturbed,” especially when state recapitalizations strengthen a company.

The supervisory board said May 27 that it couldn’t accept any weakening of its hubs at Frankfurt and Munich airports after the EU asked it to cede airport slots to rivals. That effectively shut down progress on a bailout package the company agreed on with Berlin earlier this week by delaying indefinitely a shareholder meeting scheduled to approve it.

EU regulators are under strain to police huge subsidies governments are showering on companies to help them survive the coronavirus crisis. Germany’s aid to business far outweighs any other EU country, leading to fears German companies will survive the crisis while others founder.

A Lufthansa spokesman declined to comment on Vestager’s press conference.

“Just the fact that you have the state on board as a shareholder may also trigger more trust in your viability,” she said. “And in particular, if you are a company with market power and the recap is more than 250 million euros. We find that there is such a big risk of leveling the playing field or disturbance of competition that you will have to remedy this,” Vestager said. “The economy will pick up again and there will be competitors.”

“It is high priority to get an agreement and we are in in very close contact” with the German authorities, she said. “I can tell you that, but I can not tell you when we will be done.”

Airport slots that determine when airlines can fly routes from airports are “a very valuable resource” and “often become the center of the debate because in order to fly to to an airport you need two slots,” she said. Competitors “need to have slots in an airport.”