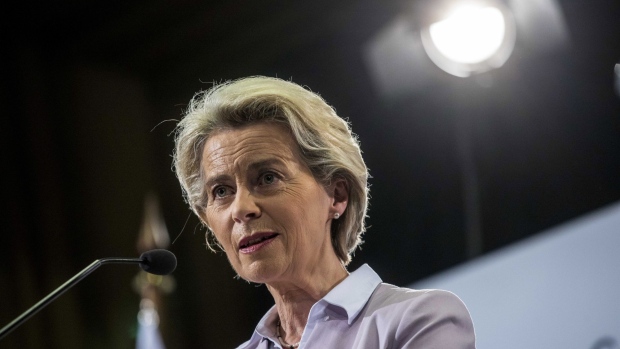 (Bloomberg) -- European Commission President Ursula von der Leyen is proposing that the bloc intervene in the gas market to cap the rise in prices that is threatening to push the region into recession.

Bowing to pressure from more than half of the EU’s member states calling for action to rein in soaring energy costs, von der Leyen is suggesting a plan that would include a temporary price limit in relation to the Dutch Title Transfer Facility -- the virtual marketplace whose main index is the benchmark for all gas traded in Europe.

The commission contends it no longer reflects the bloc’s energy reality and the quickly shrinking share of Russian gas. The proposal, details of which still need to be worked out, would also involve working on setting up a new LNG benchmark.

“Pending the introduction of such a complementary benchmark, we should consider a price limitation in relation to the TTF in a way that continues to secure the supply of gas to Europe and to all Member States and that would demonstrate that the EU is not ready to pay whatever price for gas,“ von der Leyen wrote Wednesday to EU heads of government.

The latest effort would come after the EU has already imposed windfall taxes on energy companies’ profits and agreed power and gas-demand reduction goals to contain an unprecedented energy crunch triggered by a cut in supplies from Russia following Moscow’s invasion of Ukraine.

But those actions have not been enough to alleviate the fears of many governments, who over the past weeks have been pushing for a cap on all wholesale gas transactions amid concerns over rising prices and potential social upheaval.

The commission had earlier this year highlighted the drawbacks of the intervention it is now weighing. They included endangering the security of supply and risk of undermining the consumption-cut targets. It has changed its course two days before an informal meeting of EU leaders in Prague.

Still, von der Leyen made clear that a cap would still require a broad reduction in energy usage.

“As the EU imports almost all the gas it consumes, the deeper the public intervention on gas prices we envisage, the more demand reduction and supply solidarity we need,” she wrote. “We therefore need to acknowledge the risks that a cap on gas prices entails and put in place the necessary safeguards.”

A price cap on all wholesale gas market transactions has been urged by at least 15 member states, including Spain, Italy, Belgium, Poland and Greece. Germany, the region’s biggest economy, has been against such a move.

“Of course the states are under pressure,” he told the Energy Intelligence Forum in London on Wednesday. “But at the end of the day they should rely on the companies.” He added he was surprised that “none of the governments asked the two largest LNG players,” referring to Shell and TotalEnergies.

In her letter to EU leaders, von der Leyen also offered a measure to limit the inflationary impact of gas prices by a severing the link between the fuel and electricity costs. The commission is ready to discuss a narrower, temporary cap on the price of gas used for power generation that would be designed in a way to avoid consumption of the fuel.

The steps that the EU is taking to reduce its reliance on Russia -- from investments to energy infrastructure to insulating houses to boost energy savings -- would be expensive.

In the letter, von der Leyen acknowledged that the bloc’s current budget for the energy pivot may not be sufficient and said the Commission will explore other sources of funding. Earlier this week, two EU commissioners suggested that countries need to consider issuing new joint debt to fund Europe’s energy needs.

Noting the recent explosions in the Nord Stream pipeline, said she would present leaders with measures that would help prevent sabotage, including stress testing, preparedness, cooperation and information exchange.

(Updates with TotalEnergies in the ninth paragraph.)