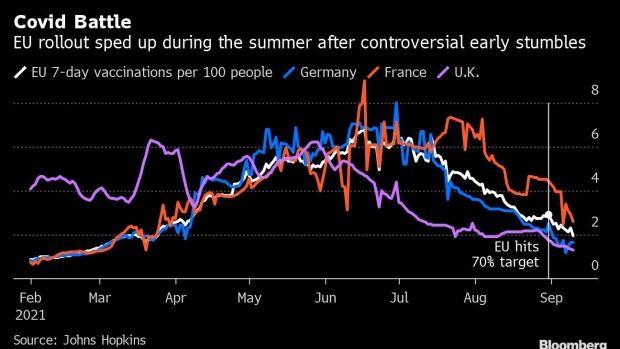 Speaking to lawmakers in Strasbourg, France, von der Leyen promoted the fact that the European Union has vaccinated 70% of its adult population and is now among the world’s leaders in its pandemic response.

The EU’s response is all the more remarkable given the slow initial rollout of its vaccine campaign, which lagged major countries like the U.S. and the U.K. and was marred by embarrassing missteps, such as infighting over which vaccines to support. Von der Leyen also highlighted the lack of vaccines for the global community and pledged to donate 200 million additional doses to the rest of the world, boosting the EU’s total donations to 450 million doses.

She said the European Commission would present a new European chips act in the coming week aimed at linking together world-class research, design, testing and production capabilities.

Calling it “a matter of tech sovereignty,” she said that EU nations need to “jointly create a state-of-art chip ecosystem.”

Von der Leyen said the EU must “be a world leader again. This should be our aim.”