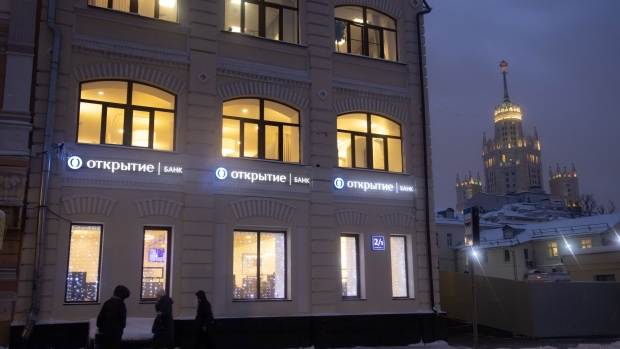 The draft proposals, which EU leaders are expected to green-light as part of a sanctions package at their emergency summit, would also broaden sanctions on individuals, as well as criteria to target wealthy Russian oligarchs, and to tighten visa rules for diplomats, making asset freezes and travel bans more effective, the people said. The proposals are still subject to change and would require the unanimous approval of the EU’s 27 member states.

The financial sanctions included in the package, which have been closely coordinated with the U.S. and the U.K., are aimed at restricting Russia’s access to international markets. The U.K. announced its package of sanctions on Thursday, with many provisions mirroring ones the EU adopted earlier this week or is considering Thursday.

Two additional Russian banks -- Alfa Bank and Bank Otkritie -- would be added to the list of financial institutions prohibited from borrowing or buying securities. It would prohibit the listing of new shares of Russian state-owned enterprises on EU exchanges and blacklist several state-owned companies in the shipbuilding and shipping industries. The people familiar with the proposal described it on the condition of anonymity since it is still under discussion.

The EU would also move to stop financial inflows from Russia into the EU by imposing limits on bank deposits and bar Russians from investing in EU securities.

In one of the strongest elements of the package, the EU has worked in lockstep with the U.S. to introduce export controls on dual-use and high-tech goods, with a particular focus on electronics, computers, telecom and information security, sensors and lasers and marine applications.

“Our measures will weaken Russia’s technological position in key areas, actually from which the elite makes most of their money,” von der Leyen says. “And this ranges from high-tech components to cutting-edge software. This will also seriously degrade the Russian economy in all areas in the future.”

The proposal also includes an export ban on aircraft, aircraft parts and related equipment, as well as a ban on the sale of equipment and technology needed to update Russian oil refineries to modern environmental standards.

The leaders could also discuss even stronger measures, such as banning Russian financial institutions from interbank operations in euros, such as clearing, and cutting Russia off Swift, the international payments system, according to people familiar with matter. But those steps are seen less likely for now, with some western European governments strongly opposing a Swift cut-off. The bloc is also unlikely to sanction Russian President Vladimir Putin directly. One person said some leaders will push for a more ambitious package than the current proposal, but other states prefer an incremental approach.

Another topic that EU leaders will address Thursday night includes a further round of sanctions that would include Belarus for its role in Russia’s attack on Ukraine.