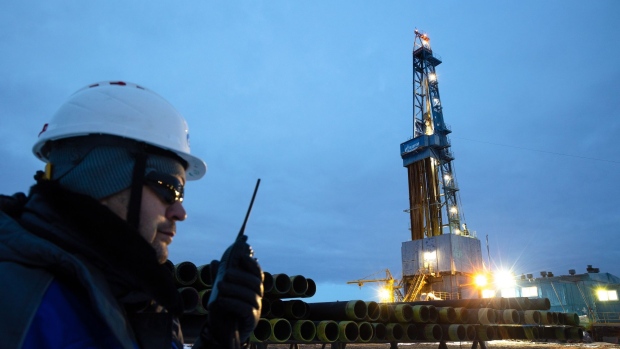 Lights illuminate a gas drilling rig on the Gazprom PJSC Chayandinskoye oil, gas and condensate field, a resource base for the Power of Siberia gas pipeline, in the Lensk district of the Sakha Republic, Russia, on Wednesday, Oct. 13, 2021. European natural gas futures declined after Russia signaled that it may offer additional volumes soon. Photographer: Andrey Rudakov/Bloomberg , Bloomberg

(Bloomberg) -- The European Union said that gas companies would violate sanctions if they open bank accounts in rubles to buy Russian gas, but can still purchase the fuel if they follow the bloc’s guidance.

The European Commission said that companies can open an account in euros or dollars at Gazprombank and declare the transaction closed once that payment is deposited. Opening a rubles account would go “beyond the indications which we gave to the member states of what was allowed under the regime,” Eric Mamer, a commission spokesman, said Tuesday.

“Anything that goes beyond opening an account in the currency of the contract with Gazprombank and making a payment to that account and then issuing a statement saying that with that you consider you have finalized the payment contravenes the sanctions,” Mamer said.

The commission sent revised guidelines for gas purchases to member states on Friday. In the updated recommendations, it said companies should make a clear statement that they consider their obligations fulfilled once they pay in euros or dollars.

The written guidance stopped short of addressing the requirement by Moscow to open a second account in rubles, but EU officials told reporters last month that such a move would contravene sanctions.

EU sanctions “do not prevent economic operators from opening a bank account in a designated bank for payments due under contracts for the supply of natural gas in a gaseous state, in the currency specified in those contracts,” the commission’s guidance said. “Operators should make a clear statement that they intend to fulfil their obligations under existing contracts and consider their contractual obligations regarding the payment already fulfilled by paying in euros or dollars, in line with the existing contracts.”