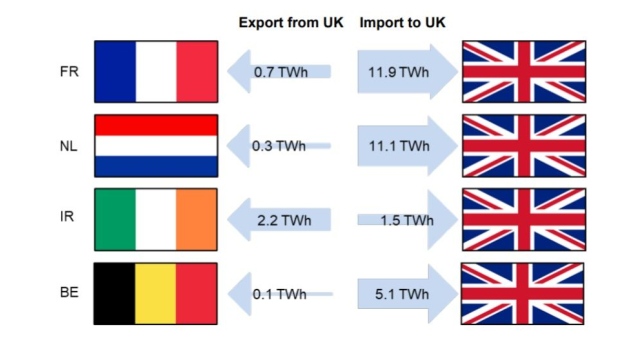 Gulls fly around a fishing trawler docked in the harbor in Port-en-Bessin, France, on Thursday, Oct. 15, 2020. Germany put pressure on France to back down on its demands over fishing, one of the biggest obstacles to a post-Brexit trade deal with the U.K., as Boris Johnson warned he is “disappointed” about the progress of the negotiations. Photographer: Cyril Marcilhacy/Bloomberg , Bloomberg

(Bloomberg) -- Brexit talks are going down to the wire, and the European Union’s chief negotiator Michel Barnier is threatening British access to the continent’s single energy market as a way of extracting concessions on fishing rights.

At stake is at least 6 billion euros ($7.1 billion) of natural gas and electricity traded across the English channel every year, according to research by Bruegel, an economics research group in Brussels. That benefits companies from Centrica Plc and National Grid Plc in the U.K. to Electricite de France SA and RWE AG on the continent.

In negotiations, Barnier is conditioning the U.K.’s access to the EU energy market to the EU’s rights to fish in British waters. Envoys are working on a deal that will apply after the U.K. leaves the EU’s single market at the end of the year.

The impact of failing to reach a deal that includes energy would “disproportionately fall on the U.K. as the continental market is much larger and already better integrated,” said Simone Tagliapietra, research fellow at Bruegel.

Electricity is a particular pinch-point. Britain is a net importer with wholesale prices higher than its neighbors. About 7% of total demand comes from power sent along five huge cables, four of which are connected to Europe. Last year, net imports grew 10% to a record 21.4 terawatt-hours, according to data from Enappsys Ltd.

What happens if an agreement is reached?

The negotiating position outlined by the EU is very close to the way things are now. If that’s agreed, both sides would continue to trade gas and power more or less the way they do now. There could be some divergence in the future as new rules are made on either side, but both would be starting from the same point.

And if there’s no Brexit deal?

The markets would operate less efficiently than they do now, according to Alex Harrison an energy partner at Hogan Lovells International LLP. The U.K. would need to replace rules that regulate how electricity and gas flow through pipeline and cable links between each region.

New regulations would likely be a version of what we have now, but trade might not be as efficient. For example, auctions for capacity on interconnectors between Britain and EU nations, is currently integrated with European electricity markets to ensure power supply flows to where prices are more expensive. Without that provision, interconnector capacity would be auctioned separately, and flows might not follow prices.

Without a deal, costs for British consumers could go up by 2 billion pounds ($2.6 billion) a year as the U.K. misses out on the benefits of an integrated market, a report by the UCL European Institute shows.

What is the worst-case scenario?

If relations between Britain and the EU broke down completely and actions became punitive, then power and gas could stop flowing. This would have serious implications for Britain’s security of supply. The U.K. would lose 7% of its electricity supply and would struggle to find an easy replacement. It could even lead to rolling blackouts at times of peak demand.

Gas accounts for about 80% of the value of the energy trade between the U.K. and EU, with producing fields in the British part of the North Sea feeding into the continental grid. There are three gas interconnectors between the U.K. and Belgium, the Netherlands and Ireland.

These deliveries have become more important in recent years with the closure of the Rough gas storage facility, a substantial site that allowed for flows produced in the summer to be set aside for winter when they’re most needed. Now, Britain mainly relies on the rest of Europe to supply that gas-grid balancing service.

Are there other impacts?

Shutting Britain out of the European gas market would have consequences for Ireland, which imports 56% of its consumption from the U.K. The creation of the Single Electricity Market in Ireland links the Republic of Ireland and Northern Ireland and could be entirely disrupted.

What does the government say?

The government gives some guidance for electricity trading from Jan. 1 on its website: