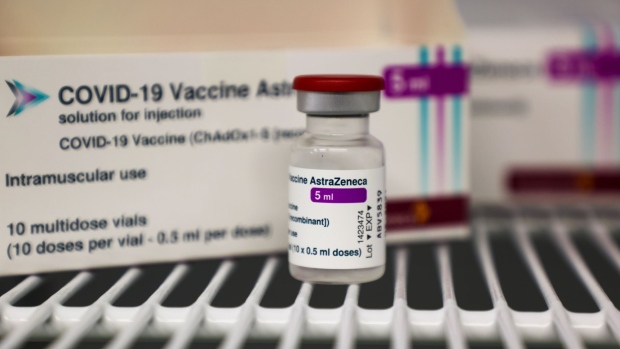 A vial and boxes of vaccine, produced by AstraZeneca Plc, in cold storage at a Covid-19 vaccination centre in Gelnhausen, Germany, on Wednesday, March 31, 2021. Chancellor Angela Merkel said Germany will halt the use of AstraZeneca Plc's Covid-19 vaccine for people younger than 60 starting Wednesday after a handful of new cases of severe blood clots emerged. Photographer: Alex Kraus/Bloomberg , Bloomberg

(Bloomberg) -- The European Union is seeking to form a common position to respond to links between AstraZeneca Plc’s Covid-19 vaccine and a rare type of blood clots.

As the EU seeks to rev up its sluggish vaccine program, Health Commissioner Stella Kyriakides told the bloc’s health ministers at a meeting Wednesday evening that they needed to forge “a coordinated European approach.”

“This will be key for us to speak with one voice across the EU,” she said. The bloc needs “an approach which does not confuse citizens and that does not fuel vaccine hesitancy, because it is based on science.”

Her comments comes as Italy prepares to follow Germany and France by limiting the AstraZeneca shot to people over 60, according to people familiar with the discussions. Prime Minister Mario Draghi’s government is urging other EU members to implement the same policy, said the people who asked not to be identified.

The restriction comes just hours after the European Medicines Agency announced finding a “strong association” between the Astra vaccine and blood clots. The regulator didn’t issue any guidelines about age, leaving the implementation up to member states.

The U.K. is now advising that those under the age of 30 be offered an alternative vaccine if one is available, the country’s Medicines and Healthcare Products Regulatory Agency said Wednesday.

The warnings dealt another blow to the vaccine Astra developed with the University of Oxford and continued to cloud its global rollout. Despite the concerns, regulators on Wednesday insisted that the product’s benefits outweigh its risks, that the clot occurrences are rare and that the shot should remain a vital tool in the pandemic fight.