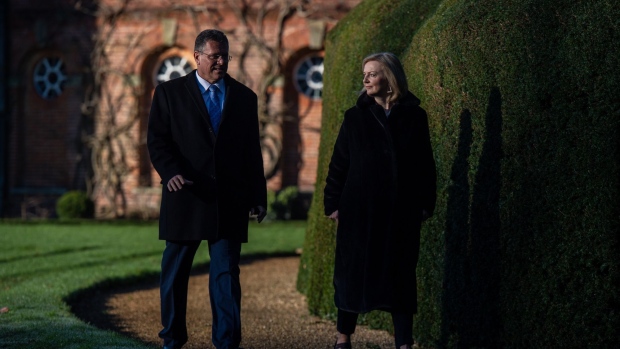 Maros Sefcovic, vice president of the European Commission, left, and Liz Truss, U.K. foreign secretary, walk in the gardens at Chevening House in Chevening, near Sevenoaks, U.K., on Thursday, Jan. 13, 2022. Truss enters the latest round of post-Brexit negotiations over Northern Ireland, facing a choice between picking a fight with the European Union that would curry favor with her Conservative Party faithful or cutting a deal to avert a trade war. , Bloomberg

(Bloomberg) -- The European Union’s Brexit negotiator told lawmakers behind closed doors that he has yet to see a fundamental change in the U.K.’s stance in post-Brexit talks despite a positive shift in tone, cautioning that a window of opportunity will close late next month.

European Commission Vice President Maros Sefcovic said that the talks aim to reach an agreement by the end of February, ahead of campaigning for Northern Ireland Assembly elections in May, according to a person familiar with the briefing he gave to senior European Parliament legislators on Thursday.

Sefcovic and Foreign Secretary Liz Truss agreed on Jan. 14 to intensify negotiations over the so-called Northern Ireland protocol, with Truss leading the British side for the first time. Truss, who succeeded former Brexit chief David Frost in December, will visit Brussels for more talks on Monday.

Negotiations have been at a virtual standstill for months, with Truss warning that she is prepared to unilaterally override parts of the post-Brexit agreement on Northern Ireland if talks fail. Sefcovic said recently that the foundation of the entire deal between the U.K. and EU would be jeopardized if London took that step.

Truss believes she can create momentum, but there was no progress on substance, Sefcovic told the lawmakers. Sefcovic mentioned his surprise and concern at how much Truss spoke about the principles of the protocol, raising key issues that are not acceptable for the EU, according to the person familiar with the meeting.

Sefcovic said that Truss raised issues including eliminating checks for all goods that remain in Northern Ireland, state aid, and the European Court of Justice. The two agreed on very intense schedules for meetings at technical and political level, with a huge amount of work ahead, he added.

Sefcovic said the atmosphere could change by the end of February when campaigning starts in Northern Ireland, with both he and Truss agreeing that the Northern Ireland protocol may become one of the principal issues of the campaign. The U.K. will take this into consideration, Sefcovic told the lawmakers.