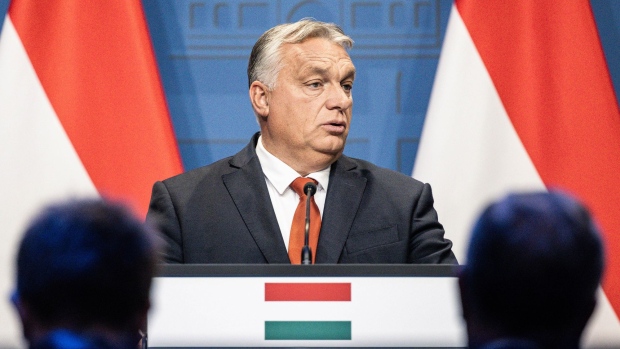 Viktor Orban, Hungary's prime minister, speaks during a news conference in Budapest, Hungary, on Monday, Oct. 3, 2022. Hungary's parliament is likely to approve Monday the first of more than a dozen anti-corruption measures that the government has vowed to implement to unlock billions of euros in European Union funds. , Bloomberg

(Bloomberg) -- European Union member states are poised to give Hungary two extra months to comply with demands to rein in corruption and fraud before deciding if the bloc should withhold access to billions of euros in funding.

EU justice ministers may agree to the extension at an Oct. 13 meeting, according to a person familiar with the deliberations. An overwhelming majority of EU members are in favor of giving Hungary more time.

EU finance ministers have one month to decide, until Oct. 19, any funding freeze but they have the option to extend the deadline by as much as two months, which is what they’ll likely do, according to the person, who asked not to be identified becuase the discussions are private.

A qualified majority of member states is required for the commission proposal to take effect.

Prime Minister Viktor Orban’s government was pushing for the delay to allow itself time to push through parliament 17 pieces of legislation it had agreed to in talks with the commission, including cutting the number of single-bid tenders and stepping up corruption investigations.

This week lawmakers in Budapest passed five of those measures, though Orban unexpectedly asked for a constitutional review of a key law that would create a mechanism to overrule police or prosecutorial decisions on dropping suspected graft cases involving public funds.