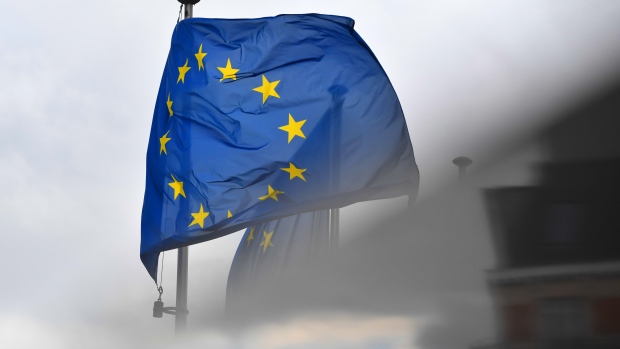 A European Union (EU) flag flies outside the Berlaymont in Brussels, Belgium, on Wednesday, Oct. 7, 2020. As the Brexit talks enter their final critical few weeks, officials on both sides are voicing doubts over whether they can get a deal over the line. Photographer: Geert Vanden Wijngaert/Bloomberg , Bloomberg

(Bloomberg) -- The European Union will take China to the World Trade Organization on Thursday over its coercive practices against Lithuania and some exporters from other member states.

“These measures are a threat to the integrity of the single market because they affect intra-EU trade and EU supply chains and have a negative impact on EU industry,” European Commission Vice President Valdis Dombrovskis, told Bloomberg in an interview.

Dombrovskis said the EU worked hard to gather evidence to document China’s restrictive measures against European products, because the actions were conducted informally and many European companies were reluctant to cooperate because they fear retaliation from Beijing.

China, the EU’s main trade partner, started blocking Lithuanian products -- and some other European goods that contained Lithuanian components -- at customs last December, after Taiwan opened a representative office in Vilnius under the country’s name instead of the capital, Taipei. Beijing considered the move a challenge to its sovereignty.

The diplomatic standoff escalated after China recalled its ambassador and downgraded ties with Lithuania. Meanwhile, the Lithuanian government has rejected any change to the name of the representative office. China has denied that it’s blocking Lithuanian exports.

The EU’s move Thursday is largely symbolic because it will take several years for the case to work its way through the WTO’s backlogged dispute-settlement system. Even if the EU wins an initial ruling, China could essentially veto it by appealing to the WTO’s inoperable appellate body.

The case could present the first major test for an EU-crafted dispute-settlement mechanism -- known as the multi-party interim appeals arrangement -- of which China and the EU are both members.

Once the EU launches the case, China has 60 days to enter into consultations with the bloc. If that doesn’t resolve the issue, Brussels can request the establishment of a WTO panel. Those proceedings normally last more than the maximum stipulated period of nine months.

The Lithuanian Confederation Industrialists, the country’s largest business association, said some 130 companies are unable to send products to China or to clear shipments through customs. The economic value of the containers blocked is around 26.5 million euros ($29.9 million), EU officials said.

The most affected sectors have been pharmaceuticals, lasers, electronics and food and beverages.

“China in a sense is also putting pressure on multinational companies to abandon the use of Lithuanian components in their production, otherwise they also may face import restrictions,” Dombrovskis said. “It’s clear that these kind of practices applied by China are in breach of the WTO rules.”

According to China’s customs statistics, trade of goods from Lithuania to China dropped by 91% in December compared with the same period of last year, he added. The EU’s figures aren’t available yet.

The latest salvo in the dispute with China came as the EU is preparing a new anti-coercion mechanism that would allow for countermeasures in situations like the Lithuanian case.

“We urge EU member states and the European Parliament to fast-track the work on the anti-coercion mechanism, because that would give us the possibility to react swiftly and effectively when faced with economic coercion,” Dombrovskis said.

The bloc is one of the first jurisdictions to design such a tool, and the Lithuania-China dispute has sparked interest among diplomats to discuss this type of instruments at the Group of Seven level, an EU official said.