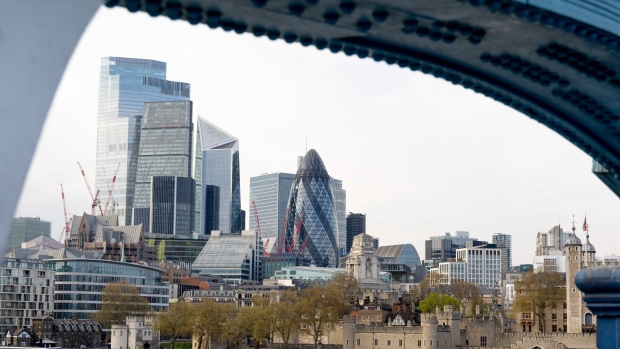 Skyscrapers and buildings including 30 St. Marys Axe, also known as The Gherkin, on the City of London skyline, U.K., on Tuesday, April 27, 2021. In a financial hub that draws more international capital than any other, the fate of the older buildings could hit the fortunes of some of the world’s biggest real-estate investors, from China Investment Corp. to Norway's sovereign wealth fund and Malaysia's biggest pension fund. Photographer: Jason Alden/Bloomberg , Bloomberg

(Bloomberg) -- The European Union should consider regulatory measures to reduce its dependence on two major U.K.-based clearinghouses, the bloc’s markets watchdog said, while stopping short of calling on the EU to strip away their recognition.

The European Securities and Markets Authority said in a statement on Friday that it had identified “important risks and vulnerabilities” from certain U.K.-based clearing services at LCH Ltd. and ICE Clear Europe Ltd., particularly during times of distress.

For now, ESMA said the cost of derecognizing some of their services outweighs the benefits but the EU should take steps to reduce the size of the bloc’s exposure to the firms. That includes “requirements for alternative clearing arrangements for clearing members or clients, and appropriate prudential requirements,” to bring the business back to the continent.

London’s dominance of euro-denominated clearing -- a business that plays a fundamental role in ensuring the safety of trading in interest-rate swaps -- has been a hotly contested issue ever since Britain’s 2016 decision to exit the EU. LCH alone cleared $1.1 quadrillion of swaps last year.

If the European Commission stops recognizing a clearinghouse that prevents it serving EU clients until it gains authorization. The business is seen as one of the crown jewels of the City of London and essential to its attractiveness as an international financial center.

Brussels, after months of silence, said in November it would extend a temporary waiver that allows its banks and money managers to clear trades in the U.K. But it has made clear more of the business should be done on the continent.

ESMA’s proposals “aim to strengthen our approach to systemically important third country [clearinghouses] and contribute to the ongoing stability of EU financial markets,” the regulator’s chair Verena Ross said in a press release.

EU authorities could consider whether a regulatory push would encourage clearing participants to reduce their exposure to such clearinghouses and rebalance toward companies in the EU, ESMA said.

The regulator said it had “identified several scenarios” in which LCH and ICE “may potentially pose a financial stability risk to the EU or individual member states.”

The U.K. and major lobby groups for the biggest banks and money managers in the world are calling for the EU to maintain easy access to London clearinghouses, including the London Stock Exchange Group Plc’s LCH unit which is the world’s biggest for euro interest rate swaps.

Clearinghouses serve as a key hub in the global financial system, settling hundreds of trillions of dollars in deals between banks, hedge funds, pensions and a wide range of corporations. The firms collect collateral, or margin, from buyers and sellers to reduce the risk that the default of one side spreads panic to the other and, in turn, across the broader system.