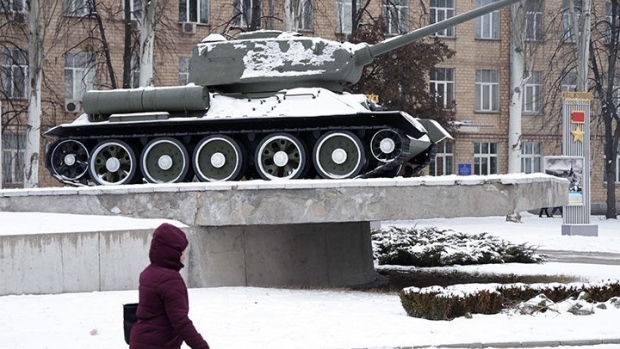 (Bloomberg) -- European governments are struggling to decide what specific actions short of a military attack on Ukraine should trigger sanctions on Russia, complicating Western allies’ attempts to present a united front that could deter Moscow.

European Union preparations, coordinated with the U.S., are focusing on other forms of possible Russian aggression, including a disinformation campaign, a cyberattack, limiting gas supplies or attempts to destabilize the government of President Volodymyr Zelenskiy or the central bank, according to EU officials with knowledge of the discussions.

But countries are in divergence over how to respond to the different scenarios, even debating what would constitute an incursion, said one of the officials, who asked not to be identified because the talks are private.

Western allies are pushing ahead with diplomatic efforts to avert war between Russia and Ukraine, after U.S. President Joe Biden held what he described as a “great” call with European leaders on Monday. But European countries have held different views on what political, economic or financial sanctions should be imposed on Russia if it acts against Ukraine, resisting pressure from the U.S. to agree on measures in advance, as a deterrent.

The U.S. and the U.K. have ramped up their warnings over a potential invasion as Russia has amassed more than 100,000 Russian troops near Ukraine’s borders. Moscow has shown no signs of de-escalation even as the Kremlin denies it intends to invade Ukraine.

The U.S. and Russia are still trying to reach a diplomatic solution. The two sides held talks in Geneva last week. Washington and NATO are planning to respond to Russia’s demands in writing in the coming days.

EU countries agree that any crossing of the border by Russian troops must prompt sanctions, the officials said. But beyond that, there is no agreement on other trigger points for restrictive measures.

Another issue that could affect the severity of any measures is that officials have yet to agree on defining a clear timeline for what would constitute a temporary strike as opposed to a more lasting offensive, one of the officials said.

Amid discord over what merits sanctions, several Baltic and eastern European states argue a hybrid cyberattack should be enough, according to the officials. The EU’s efforts to agree on joint measures are complicated by the difficulty in identifying those responsible, especially in the case of acts to destabilize Zelenskiy’s administration and in cyberattacks.

The EU is honing in on a package that would include targeting Moscow’s ability to convert currency, according to one of the officials. The bloc is also looking at export controls, export-import bans and limiting access to key technology -- the Swift payments system and energy penalties are still on the table. But the EU, the U.S. and the U.K. need to do more work on identifying and clarifying specific triggers for different sanctions, a key topic in Biden’s call with European leaders Monday night, the official added.

Several major western member states of the EU have also asked for carve-outs within some of the proposed measures, including transition periods and exemptions for some banks, energy-related transactions and existing contracts, one of the people familiar said.

The European Commission, the EU’s executive arm, is expected to share its package of proposals with member states only if and when Russia acts against Ukraine. Sharing the document for open discussion before then could jeopardize the EU’s credibility, several officials said. Discussions would be leaked, revealing the EU’s hand to Russia, and descend into member states picking and choosing the measures that least affect their economic and other interests.

It would not be wise to publicly proclaim the EU’s intentions, then fail to meet expectations once Russia acts, another EU official said. Unlike the U.S., the bloc need unanimous agreement from 27 member countries to impose sanctions, and several will likely argue for only limited measures if Russia stops short of military aggression, the official said.

Biden and his top European allies projected unity following the 80-minute call that U.K. Prime Minister Boris Johnson’s office said focused on “the need to take all steps within our power” to prevent Russian aggression.

“I had a very, very, very good meeting,” Biden told reporters at the White House. “Total unanimity with all the European leaders.” A spokesman for German Chancellor Olaf Scholz said the leaders “shared the view that it was up to Russia to take visible steps of de-escalation” while agreeing to continue diplomatic efforts.