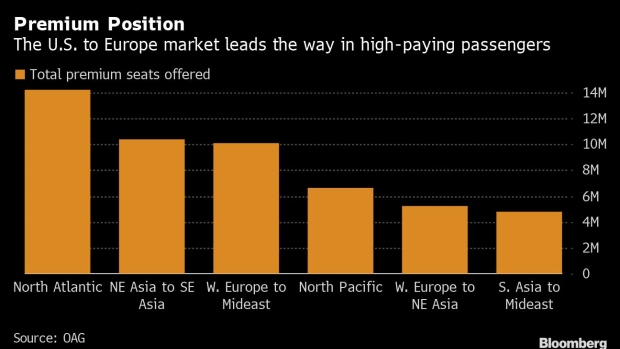 A traveler walks to a parking garage at San Francisco International Airport (SFO) in San Francisco, California, U.S., on Tuesday, May 11, 2021. A Chronicle analysis of Transportation Security Administration (TSA) data shows that SFO has been slow to approach pre-pandemic passenger traffic compared with the 50 airports that saw the most traffic at the beginning of 2020, reports the San Francisco Chronicle. Photographer: David Paul Morris/Bloomberg , Bloomberg

(Bloomberg) -- Negotiations between the European Union and the U.S. to recognise each other’s vaccination passes are struggling to make headway due to the absence of a federal certification system in America, according to a diplomatic memo seen by Bloomberg.

EU ambassadors were told at a meeting on Thursday that the European Commission is, however, in an advanced stage of talks with the U.K., and in contact with Japan, Australia and Canada. Discussions with Ottawa were described as promising and officials are hoping that the EU’s Covid certificates will be recognised in September when Canada is due to reopen travel to vaccinated non-U.S. travelers, the memo says.

The talks are taking place as Europe and much of the western world starts to gradually open up air travel after it ground to a near halt during the pandemic. But with the delta variant becoming dominant in much of the EU, and vaccination and infection rates varying significantly across countries, rules remain patchy. Some countries require people to quarantine while others only allow vaccinated arrivals.

The U.S. has been slow to lift a ban on visitors from most of Europe instituted during the Trump administration and continued by President Joe Biden.

The EU launched its Covid pass, which also registers negative tests, at the beginning of the month. The commission told ambassadors that as of 19 July, more than 290 million certificates had been issued, of which 230 million are vaccination passes. It also noted that by early July 2021, air traffic had increased by 20% and was expected to reach more than 60% of 2019 levels this month.

Some member states now require a Covid pass to enter certain events and settings, such as soccer stadiums and indoor restaurants. The bloc’s executive arm explained that talks with non-EU countries were about ensuring that passes were interoperable, and met technical and security standards.

Negotiations with the U.S. have been ongoing since last month when the two sides set up a task force to explore how to resume transatlantic travel. The concept of vaccine passports has been met with significant resistance in the U.S., especially from Republicans.

The North Atlantic corridor connecting the U.S. with Europe is the single most profitable corner of the global aviation market, filled with premium travelers paying extra for first-class and business-class seats.

The travel route was devastated by the pandemic and carriers on both sides of the Atlantic have lobbied forcefully for a relaxation of border curbs.

They’ve had some relief since late June, when the EU started to open up to travelers from outside countries including the U.S. But the move hasn’t been reciprocated. Airlines have since been bringing back flights, but while Americans can holiday in Greece or Spain, Europeans aren’t able to go to New York or Miami.

Seat capacity between the U.S. and major European markets including France, Germany and Italy, stands at about 70% of where it was before the start of the pandemic, according to data from flight tracker OAG.

The U.S. last week raised its travel alert on the U.K., telling Americans to avoid traveling there because of a surge in infections.

The commission told ambassadors at the meeting this week that it had received requests for mutual vaccine pass recognition from several countries, including North Macedonia, Turkey, Israel, Morocco and Ukraine. It has already reached an agreement with Switzerland and is due to do so soon with the Holy See, San Marino, Andorra and Monaco.