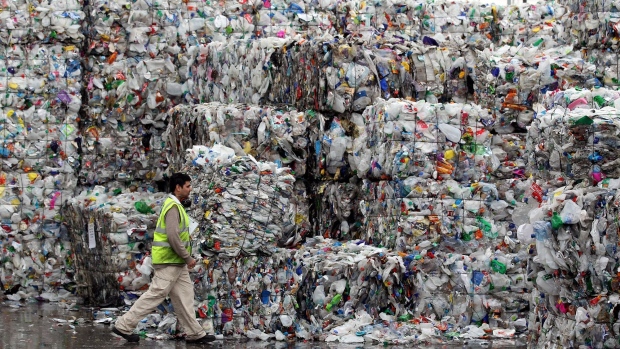 LONDON - MARCH 25: An employee of the 'Closed Loop Recycling' plant walks past stacks of plastic bottles at their plant in Dagenham on March 25, 2010 in London, United Kingdom. The state of the art plant is the first in the UK to produce food grade recycled plastic from bottle waste. Over 35,00 tonnes of plastic bottles are recycled at the plant annually, representing almost 20% of the plastic bottles currently collected for recycling in the UK, and saving approximately 52,500 tonnes of carbon dioxide per year. (Photo by Dan Kitwood/Getty Images) , Photographer: Dan Kitwood/Getty Images Europe

(Bloomberg) -- The European Union is targeting coffee pods, hotel toiletries and throwaway water bottles with a set of proposals meaning to save space at landfills and reduce carbon-dioxide emissions.

“If we don’t change current trends, the volume of plastic waste could increase by 46% by 2030,” said Virginijus Sinkevicius, EU environment commissioner.

Five percent may seem small, but the amount of waste -- and corresponding emissions -- is surging as e-commerce becomes more prevalent and companies search for innovative ways to sell their products. The effort could have knock-on effects globally, given the EU is the largest single market.

The rules would have ramifications for industries ranging from food production to consumer electronics to chemical manufacturing. In the EU, about 40% of plastic and half of paper is used in packaging, and the design often makes reuse or recycling difficult.

Certain sectors -- such as the beer industry -- will face targets for reusing packaging, according to the regulations. That could lead to bottle shapes being more uniform.

Companies from Nestle SA to Carlsberg AS broadly welcomed the proposals and said that they were already undertaking efforts to reduce waste. Brewers of Europe, a trade body for the beer industry, said that they wanted to see proportionate regulation and one that isn’t discriminatory to a particular sector.

The proposals likely will face some opposition from the packaging industry and its customers, who may have to pay more to set up recycling systems or find alternative materials.

The European Organisation for Packaging and the Environment said any mandates must include incentives for investing in the required infrastructure.

Under the measures, countries would have to set up systems for recycling bottles and cans in which consumers pay extra for the item upfront and then get that money back when it’s returned. The goal is for a 90% collection rate. If states can prove they’ve hit that goal through other means, they could be exempted from the new measures.