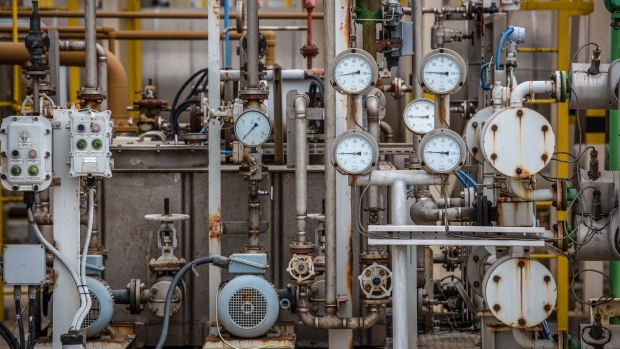 Pressure gauges at the Enagas SA storage and distribution hub at the Port of Barcelona in Barcelona, Spain, on Tuesday, March 29, 2022. The Iberian peninsula has only small gas connections to the rest of Europe, but has about 30% of the continent’s liquefied natural gas regasification capacity and two pipelines linking it to northern Africa. Photographer: Angel Garcia/Bloomberg , Bloomberg

(Bloomberg) -- The European Union is set to unveil a raft of measures ranging from boosting renewables and LNG imports to lowering energy demand in its quest to cut dependence on Russian supplies.

The 195 billion-euro ($205 billion) plan due Wednesday will center on cutting red tape for wind and solar farms, paving the way for renewables to make up an increased target of 45% of its energy needs by 2030, according to draft documents seen by Bloomberg that are still subject to change. It is set to also agree union-wide emergency rules in the event of a wide supply disruption.

The plan will give details about the EU’s attempt to reduce purchases of Russian gas by two-thirds this year. It, however, remains a mammoth challenge as the country accounted for about 40% of the bloc’s gas demand and finding replacements won’t be easy. The region has also been trying boost clean power, and some in the EU argue that the risk of a cutoff by Moscow should speed up the pivot.

“Already before Russia’s barbaric attack on Ukraine, we knew that we needed to move away from fossil fuels to a more sustainable economy,” said European Commission President Ursula von der Leyen,  said at a hydrogen event in Poland on Tuesday. “This transition will provide us not just with abundant and affordable clean energy, but also with energy security.”

Still, the bulk of the bloc’s strategy will rely on finding gas from elsewhere. Liquefied natural gas is set to replace around 50 cubic meters of Russian supplies, almost a third of the total. African nations such as Nigeria, Senegal and Angola offer largely untapped potential for LNG, the EU is expected to say. Italy’s Eni SpA has already moved to secure supplies from the continent.

Under the latest plans, the EU will recommend agreeing common principles for emergency responses should there be a wider supply disruption. It could cap gas prices to avoid “unbearably high” costs if Russia, the region’s biggest supplier, significantly limits or cuts off flows.

The plans also put a renewed focus on energy savings. The bloc will boost its efficiency goal to reduce consumption by at least 13% from projections made in 2020 versus the current 9%. It will also come forward with an “EU Save” campaign to encourage citizens to use less fuel.