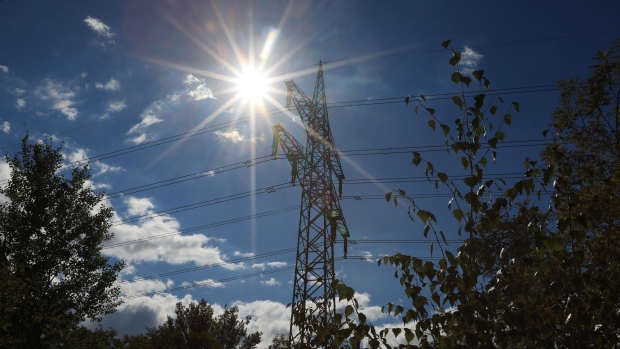 An electricity tower in Brandenburg, Germany, on Wednesday, Sept. 21, 2022. Germany will nationalize Uniper SE in a historic move to rescue the country's largest gas importer and avert a collapse of the energy sector in Europe's biggest economy. Photographer: Krisztian Bocsi/Bloomberg , Bloomberg

(Bloomberg) -- The European Union is about to take its most concrete steps yet to tackle the energy crisis. It’s already becoming clear they won’t be nearly enough.

EU energy ministers are set to back on Friday a set of emergency measures to cut power use and redirect windfall profits of energy companies to households and businesses. The 27-nation bloc has already agreed on a voluntary target to cut gas consumption by 15% after Russia, its biggest supplier, cut shipments following the invasion of Ukraine. Still, more action is needed to contain the energy crunch that’s fueling inflation and risks recession.

The room for maneuver is limited in an extremely volatile gas market, distorted by what the EU calls the weaponization of energy by Moscow. The risk to Europe’s supply is even more acute after the underwater Nord Stream link, linking Russia with Germany, was damaged in a series of blasts that several governments called “deliberate” and “sabotage.”

Energy ministers are girding for a clash in Brussels over how and whether to cap gas prices, that in turn push power and heating costs higher as winter nears.

“Europe is facing energy blackmail by Russia, and global demand for gas is higher than supply,” Energy Commissioner Kadri Simson said ahead of the meeting. “We need to work along the whole chain to tackle the challenge.”

A list of options that the EU could use, outlined by the European Commission on Wednesday, added fire to the debate after the bloc’s executive arm warned against relying solely on the idea of a price limit on wholesale gas transactions, which is being urged by 15 countries including Belgium, France, Greece, Italy, Poland and Spain.

“There is no single silver bullet. The EU has to act to lower prices but no price cap will work unless gas demand is reduced further,” said Joanna Pandera, president of Forum Energii think tank in Warsaw. “The scale of the crisis is huge, there is a lot of nervousness in member states and the discussions are poised to be very difficult.”

Read more: Why Europe Wants to Change the Way Power Gets Priced: QuickTake

Even as EU countries jockey over the plans, many governments are moving ahead with their own steps, including expensive plans to shield their consumers from the price spikes.

On Thursday, Germany announced that it’s is preparing to borrow an additional €200 billion ($195 billion) to finance a plan to limit the impact of soaring gas costs on households and companies. “Prices must go down,” Chancellor Olaf Scholz told reporters, comparing the plan to spreading a “large protective umbrella” over the economy. His government didn’t join the coalition of nations calling for a cap on wholesale gas prices at the EU level.

But such plans also risk keeping consumption high. Germany’s network regulator warned separately on Thursday that households and companies already used too much gas over the past week as temperatures dropped and said savings of at least 20% are needed to avert a shortage of the fuel this winter.

And there are other risks that varying national solutions pose: market fragmentation and deepening economic splits among member states that the commission wants to avoid. In Italy, outgoing Prime Minister Mario Draghi warned Thursday that EU nations cannot divide themselves according to the space in their national budgets and must “avoid dangerous and unjustified distortions of the internal market and once again keep Europe united in the face of emergency.”

Read more: What LNG Can and Can’t Do to Replace Russian Gas: QuickTake

The ministerial debate on Friday and a discussion on gas prices at a gathering of EU leaders on Oct. 7 in Prague will help the commission shape an effort to tackle power prices. The new regulation, planned for next month -- a lightning speed compared to the normally slow bureaucratic procedures -- may include a price cap on gas used for electricity generation.

The EU’s executive arm has also floated an option of putting a price ceiling on gas bought from Russia, both liquefied and moving via pipelines. This idea didn’t get much support from member states at a meeting of energy ministers earlier this month, with several governments arguing it risked provoking a full halt of imports without having a significant effect on the market, since Russian gas now accounts for only around 9% of supply.

Limiting the prices of imports from trusted pipeline suppliers, such as Algeria or Norway, should be done in negotiations, according to the commission, though a forced cap is an option if talks don’t lead to an agreement. To cut the cost of liquefied natural gas from reliable partners, EU members could win more leverage by opting for joint purchases. In addition, a new complementary LNG benchmark could be created to better reflect prices, the commission said.

“The gas price cap on Russia or beyond remains the mother of all the battles,” said Maximo Miccinilli, head of energy and climate at the consultant firm FleishmanHillard EU. “I am still unsure this will end well.”