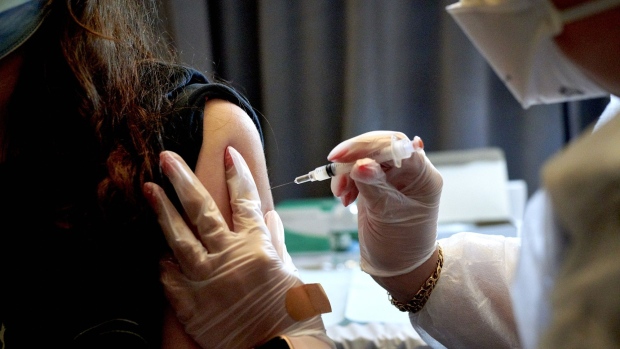 European Union leaders urged U.S. President Joe Biden to lift restrictions on exports of Covid-19 vaccines to address the desperate needs of developing countries before embarking on complex discussions about whether patent waivers might also boost supply in the longer term.

Gathering in Porto, Portugal on Friday and Saturday shortly after the U.S. suggested suspending intellectual property rights to boost the supply of Covid shots, German Chancellor Angela Merkel, French President Emmanuel Macron and Italy’s Mario Draghi appealed in unison to the U.S. president to follow the EU example and start shipping significant numbers of vaccines. They argued that any patent waiver will only increase supply in the long term and the world needs a faster solution.

“I hope that now that large parts of the American society have been vaccinated we will come to a free exchange of components and opening of the market for vaccines,” Merkel told reporters in Berlin after dialing in remotely to the summit talks. “Europe has always exported a big part of its production to the world and that should now become the regular case.”

Vaccine manufacturers in the EU have exported about half of the 400 million shots they’ve produced whereas the U.S. has gobbled up nearly all of the doses produced on its soil. According to the Bloomberg Vaccine Tracker, the U.S. has now fully vaccinated a third of its population while in India, where the virus is raging out of control, only 2.5% of the population is fully immunized.

“We should not lose sight of the main urgencies for now, which is ramping up vaccine production as quickly as possible and ensuring they are fairly and evenly distributed,” European Commission President Ursula von der Leyen told reporters following the talks.

The U.S. has sent 4.2 million AstraZeneca shots -- which aren’t authorized for use in the U.S. -- to Mexico and Canada and says it plans to ship another 60 million of those doses by the end of June. The doses are undergoing a safety review. Pfizer Inc. has also begun fulfilling non-U.S. orders from its U.S. production, but hasn’t said how many doses it has shipped or which countries have received them.

“The European Union is the only continental, democratic region of this world that is exporting on a large scale,” von der Leyen said.

French President Emmanuel Macron reprimanded the U.S. and the U.K. on Friday for blocking the export of shots and the raw materials needed to make them.

“Today the Anglo-Saxons are blocking many of these ingredients and these vaccines,” Macron said. “Today 100% of the vaccines produced in the U.S. go to the American market.”

Echoing similar comments from Berlin on Thursday, he said sharing intellectual property isn’t the immediate issue. “You can give IP to labs who don’t know how to produce it, and they won’t produce it tomorrow,” Macron said.

EU officials are skeptical that the U.S. proposal can meaningfully address the vaccine shortage, arguing that there has been no example so far of intellectual-property protections limiting supply. WTO negotiations could take many months or longer, the officials said.

Instead, the priority should be scaling up manufacturing capacity by freeing up supply chains, exports of key inputs and ingredients, the EU officials said. Crucially, they should work to connect companies with the patents and know-how to produce the vaccine with any spare manufacturing capacity around the world.

Nevertheless, Biden’s move has proved popular within his Democratic Party and could ultimately serve as leverage over pharmaceutical companies.

Jeff Zients, the president’s Covid-19 response coordinator, said Friday that supporting a waiver is “the right thing to do” but that the waiver alone won’t give the world enough vaccine.

“That’s why we will continue to ramp up our efforts -- working with the private sector and all possible partners -- to expand vaccine manufacturing and distribution around the world and increase, as you point out, the important supplies, the raw materials, the equipment needed to make the vaccines,” Zients said in Washington.