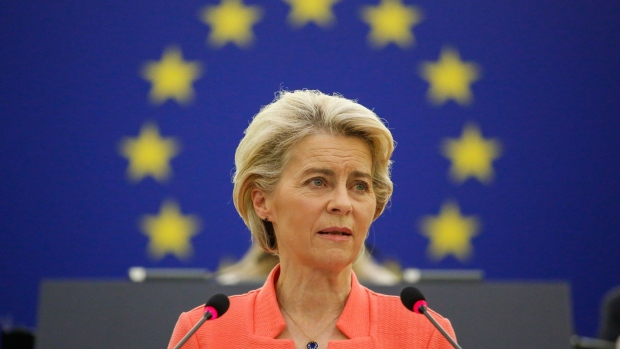 Ursula von der Leyen, president of the European Commission, delivers the State of Union 2021 address inside the Louise Weiss building, the principle seat of the European Parliament, in Strasbourg, France, on Wednesday, Sept. 15, 2021. During a closed-door meeting with European lawmakers, von der Leyen said the speech is an opportunity to show the Commission’s actions were right and pointed to what the EU has achieved on recovery plans, vaccinations and the digital Covid-19 pass, according to officials present. , Bloomberg

(Bloomberg) -- The European Union will explore ways to raise funding as a bloc to accelerate its plans to cut off from Russian gas despite continuing reservations from some of its member states.

The European Commission president, Ursula von der Leyen, told leaders Wednesday in a letter that the EU’s executive arm will look into other “sources of funding to enhance the firepower of REPowerEU,” the bloc’s initiative to reduce its dependence on energy from Moscow.

Several European countries, including Germany and the Netherlands, have been deeply skeptical about the need to raise fresh EU funds, but her call to consider EU-level funding reflects growing concerns about the massive scale of spending that will be needed to get the bloc through the next few winters without Russian gas.

It’s not clear yet whether the bloc will consider issuing new joint debt or look to other ways to raise funds.

Von der Leyen’s letter comes a day before EU leaders meet in Prague to discuss the energy crisis and days after Germany announced a €200 billion ($197 billion) package to shield its companies and households from the economic impact of the gas price hike.

Some member states have criticized Germany for taking such a muscular unilateral response because they’re worried it could undermine the EU’s single internal market.

Von der Leyen told leaders that “we need to preserve a level playing field, without distortions of the single market and act together in a spirit of strengthened solidarity between member states and with our neighbors.”

Behind closed doors on Wednesday, EU commissioners discussed whether the EU needs to come up with additional common funds to avoid the risk of fragmentation in the market, people familiar with the matter said.

The commission is considering going to financial markets to pay for this new push toward energy independence as it did during the Covid-19 crisis, although fresh joint borrowing is only one of the ideas being considered, one EU official cautioned.

Commissioners Paolo Gentiloni and Thierry Breton proposed earlier this week that the EU could follow the model of the SURE instrument, the loan-based mechanism where the bloc tapped financial markets to help member states pay unemployment benefits during the pandemic.

Leaders are expected to discuss the economic fallout of the energy crisis this week and in a regular EU summit later this month. The EU’s executive arm could clarify details of a proposed mechanism this month depending on the outcome of the leaders’ discussion, one EU official said.

But some EU officials and diplomats aren’t convinced the bloc needs fresh funding as it still has a significant amount of unspent money, including in the regular EU budget as well as pandemic-era funds.