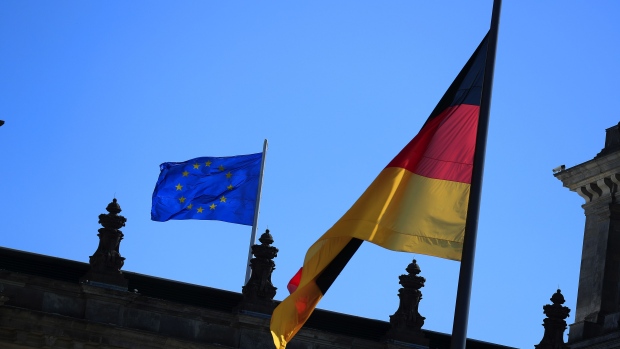 A German national flag and a European Union (EU) flag fly above the Bundestag in Berlin, Germany, on Wednesday, Sept. 9, 2020. Germany plans significant new borrowing next year to fuel the recovery of Europe’s largest economy from the fallout of the coronavirus and may continue to rely on debt spending in the future. Photographer: Krisztian Bocsi/Bloomberg , Bloomberg

(Bloomberg) -- The European Commission said that Germany can’t exempt its new proposed gas levy from sales tax but it will work with the government to help craft something that complies with the bloc’s laws.

The European Union’s executive arm is in “close contact” with Germany to find a rapid solution to its goal, commission spokesperson Dana Spinant said at a briefing on Tuesday.

The German government has said that from October households will face additional annual costs of 290 euros ($295) to pay for natural gas with prices skyrocketing amid Russia’s squeeze on energy flows to Europe. German Finance Minister Christian Lindner said that he will examine legal and political options to exempt the levy from the value-added tax to ease the cost for consumers.

“We of course share with Germany the wish that this measure doesn’t have unintended tax consequences,” another commission spokesperson, Daniel Ferrie, told reporters. “We will reply to that in due course.”