European Union countries voted to subject the U.S. to fresh restrictions on non-essential travel amid a surge in new coronavirus cases, dealing a fresh blow to the tourism industry.

A qualified majority of ambassadors voted to reintroduce the curbs, which had been lifted in June, according to an EU statement on Monday.

The U.S. had 588 new COVID-19 cases per 100,000 inhabitants in the two weeks ending Aug. 22, according to the European Centre for Disease Prevention and Control, well above the limit of 75 set out in the EU guidelines.

The guidance from the bloc is a recommendation and any decision on who to let in, and what restrictions to impose, ultimately rests with the governments of each member state. Countries can also choose to accept proof of vaccination to waive travel restrictions.

While countries have largely followed the EU guidelines, there have been times when individual nations have diverged from them. 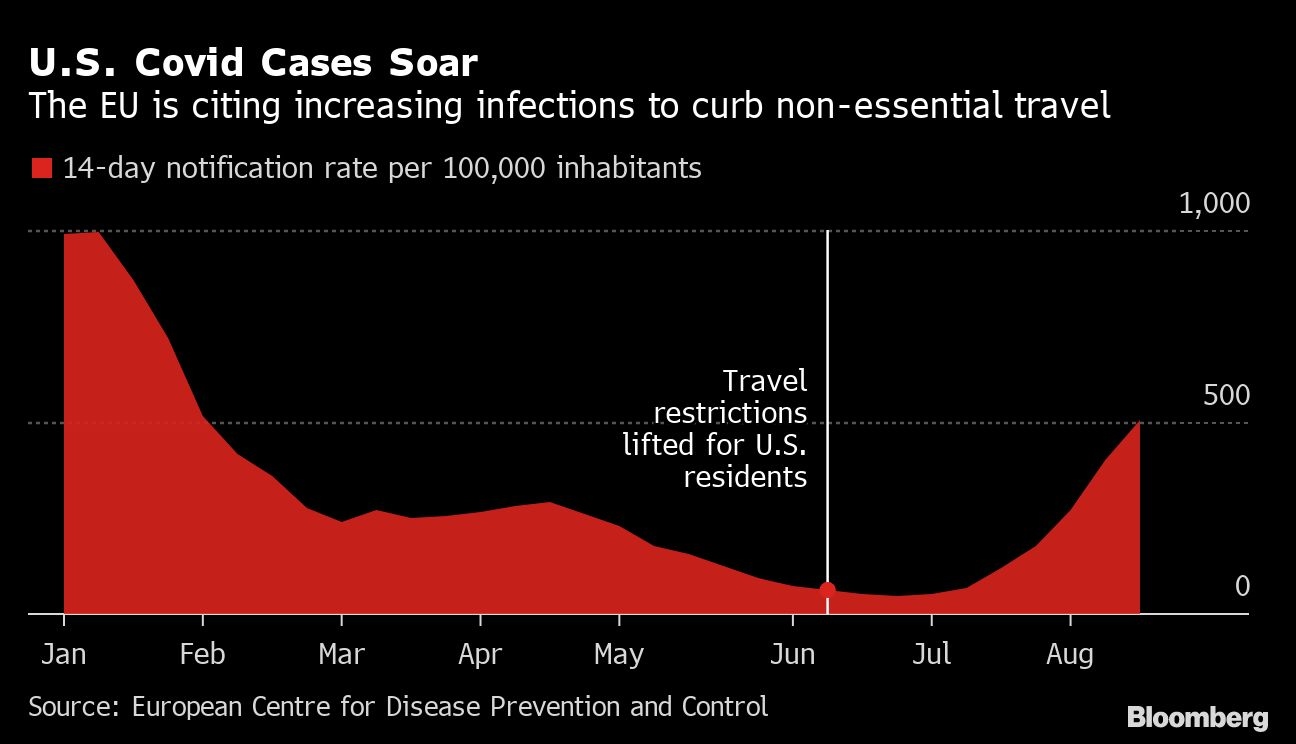 The move to restrict visitors from the world’s largest economy is a significant setback for airlines and travel firms who have been pressing for a full reopening of lucrative transatlantic routes. Shares of Air France-KLM, IAG SA and Deutsche Lufthansa AG all came under pressure last week on news of the vote.

The decision is a blow to flagship European carriers such as Lufthansa and Air France who need their long-haul passenger numbers to pick up. The recovery for airlines has not been equal across Europe, as low-cost European carriers have been able to benefit from COVID-vaccine passes, allowing for easy intra-European travel during the summer season.

Travel between the EU and U.S. has been a point of political contention. The Biden administration has kept border restrictions in place despite pressure to allow visitors from allies like the EU that have eased their own curbs. U.S. officials have cited rising delta infections as one reason for that stance.

EU rules specify that for third-countries to be allowed non-essential travel into the bloc the trend of new cases should be stable or decreasing and that no more than 4 per cent of those tested for the virus are positive. The latest U.S. numbers represent the seventh consecutive increase.

The guidelines also take into account whether variants of concern have been detected in a particular nation and whether it has reciprocated on opening travel.

Germany classified the U.S. as a high-risk area as of Aug. 15, meaning visitors need to show they’ve been vaccinated, have recovered from the disease or present a negative test result.

France, Spain, Italy and Belgium also require some kind of test to show the traveler has COVID antibodies or proof of vaccination. But none have imposed quarantine rules.