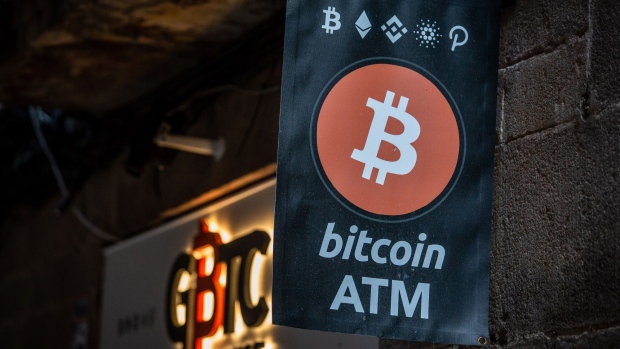 A Bitcoin automated teller machine (ATM) sign outside a cryptocurrency exchange in Barcelona, Spain, on Wednesday, March 9, 2022. Bitcoin dropped back below $40,000, erasing almost all the gains sparked by optimism about U.S. President Joe Biden’s executive order to put more focus on the crypto sector. , Bloomberg

(Bloomberg) -- A European parliamentary committee will vote Monday on a new regulatory framework for crypto assets, which could accelerate passage of a measure that industry executives say could practically ban key digital currencies including Bitcoin and Ethereum in Europe.

Crypto-assets issued and/or traded in the EU “shall be subject to minimum environmental sustainability standards and set up and maintain a phased rollout plan to ensure compliance” with those requirements, according to the final draft for the law, dubbed MiCa, that was seen by Bloomberg News. The Economic and Monetary Affairs Committee will vote on the bill on Monday.

The reference to minimum sustainability as well as rollout requirements appear to be last-minute changes introduced to curb, or ban, the use of digital currencies working on a so-called “proof-of-work” consensus mechanism, for instance Bitcoin and Ethereum.

Proof of work is one of the main consensus mechanism governing the Bitcoin blockchain. Bitcoin miners contribute computer power to the network, which secures and processes the blockchain, and are rewarded in Bitcoin for their contribution.

Fretting over whether the new, tougher draft law would be a de-facto ban of Bitcoin, some industry executives took their concerns to Twitter on Saturday.

“We at Ledger will always defend freedom and self-custody, particularly in our backyard. We are calling on you all to contact your Member of European Parliament and let them know that you oppose a Bitcoin ban in Europe,” Chief Executive Pascal Gaulthier of Ledger, one of the world’s largest crypto wallet providers said on his Twitter account.

“Since there is no way #bitcoin can & will implement a rollout plan out of POW, it would affect #BTC as well,” said Patrick Hansen, head of strategy for crypto wallet firm Unstoppable Finance, on Twitter.