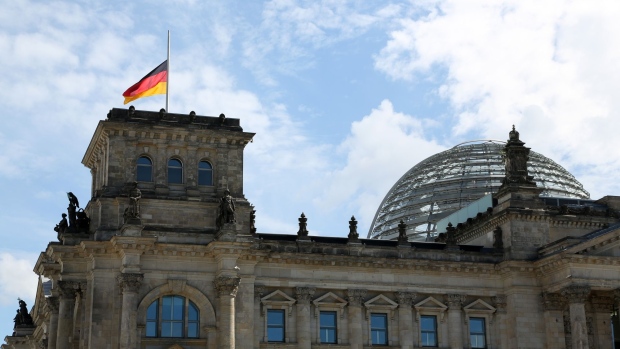 BERLIN, GERMANY - SEPTEMBER 09: The German national flag flies at half mast atop the Reichstag, the seat of the German parliament, or Bundestag, in honor of Queen Elizabeth II the day after her death, on September 09, 2022 in Berlin, Germany. Queen Elizabeth II, the UK's longest-serving monarch, has died at Balmoral Castle, her royal residence in Scotland, aged 96, after reigning for 70 years. (Photo by Adam Berry/Getty Images) , Photographer: Adam Berry/Getty Images Europe

(Bloomberg) -- The European Union will examine whether Germany’s massive move to shelter companies and households from surging power costs breaches the bloc’s rules on public subsidies.

“Germany unveiled an absolutely gigantic plan of 200 billion euros ($198 billion),” EU Internal Market Commissioner Thierry Breton said in an interview on BFM TV on Thursday. “We need to verify that this is compatible with state aid.”

European countries should guard against distorting the common market with billions in state support and must maintain a level playing field, Breton warned.

While all countries will need to borrow to help industry -- especially sectors such as steel, zinc, paper, chemicals and glass that use a lot of energy -- the system only works with similar rules everywhere, he said.

“Everyone has to borrow. Germany, France, Italy, everyone,” Breton said. “It is very important that all states have the same access to debt.”

A rift is emerging between Paris and Berlin over how EU members can protect their economies, and the French were irritated not to have been told the German announcement was coming, according to one official. Scholz and French President Emmanuel Macron are due to meet later on Thursday at an EU summit in Prague.

Breton said Germany did warn the Commission it was working on a plan before it was unveiled but didn’t reveal its size.

Asked if he was surprised, he said: “The amount is very significant.”

Read more: Berlin’s Alliance With Paris Starts to Creak With EU in a Fix

Breton added that he would be working with Competition Commissioner Margrethe Vestager to determine whether the German plan is allowed.

Vestager said in a statement that the Commission was talking to member states about extending and adjusting temporary rules on state aid to help countries and industry through the energy crisis, including higher ceilings on support and enabling access to liquidity for energy companies.

“We are facing a severe energy crisis,” Vestager said. “We need a common and coordinated response that does not compromise on Europe’s fundamental strength: our single market.”

Breton reiterated comments he made earlier in the week on the need for all countries to have similar borrowing conditions even if their fiscal situations aren’t equal.

“Countries need the same access to debt and not with some that might have better fiscal situations than others doing it before the others under conditions that create market distortion,” he said.

The commissioner also said a coordinated approach was needed to support industries hit hard by high energy prices to stop companies being tempted to produce outside Europe.