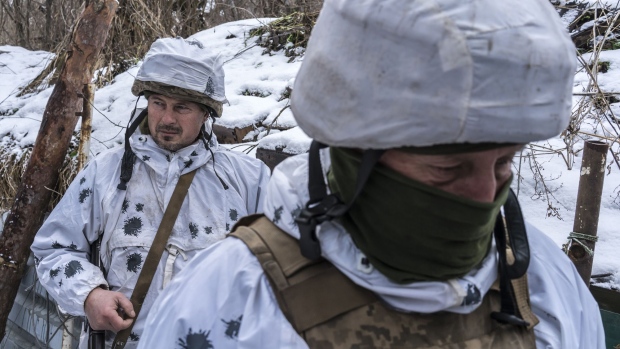 PISKY, UKRAINE - JANUARY 18: Mykola (L) and Viktor, Ukrainian soldiers with the 56th Brigade, in a trench on the front line on January 18, 2022 in Pisky, Ukraine. Negotiations last week between Russian and Western diplomats, who were hoping to defuse the prospect of a Russian invasion of Ukraine, ended inconclusively. In recent months, Russia has amassed forces and military equipment near the Ukrainian border, raising the specter of a possible invasion of the country's east, where separatists have waged a nearly 8-year war against the Ukrainian government. (Photo by Brendan Hoffman/Getty Images) , Photographer: Brendan Hoffman/Getty Images Europe

(Bloomberg) -- European Union foreign ministers will discuss Ukraine with U.S. Secretary of State Antony Blinken Monday after Washington ordered family members at its embassy in Kyiv to leave due to the “threat of Russian military action.”

The ministers will say that “any further military aggression by Russia against Ukraine will have massive consequences and severe costs,” according to a draft of the meeting’s conclusions seen by Bloomberg. Specific sanctions, however, won’t be discussed.

Over the weekend, Blinken said the allies wouldn’t immediately escalate sanctions on Russia for its military buildup around Ukraine. “The purpose of those sanctions is to deter Russian aggression and so if they’re triggered now, you lose the deterrent effect,” he said on CNN’s “State of the Union.”

All times are local (CET).

EU Says Families of Diplomats Staying in Ukraine (8:26 AM)

Josep Borrell, the EU’s foreign policy chief, told reporters ahead of the meeting that the bloc has no plans to ask the families of diplomats in Ukraine to leave, after the U.S. took such a step.

“Secretary Blinken will explain to us the reasons of this announcement,” Borrell said. “We are not going to do the same thing because we don’t know any specific reasons.”

The foreign ministers will not approve a package of possible sanctions against Russia today, Borrell said. “Be sure that everything will be ready when needed, but we are not going to announce any concrete measures.”