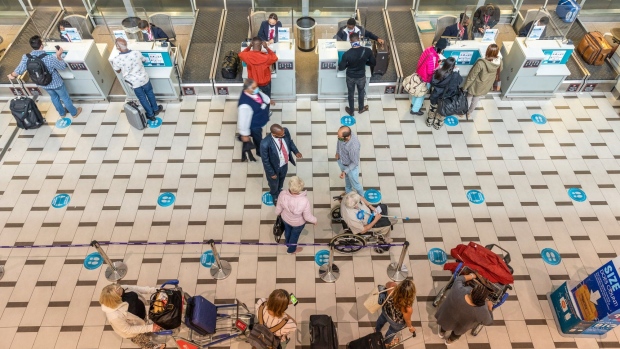 (Bloomberg) -- The European Union said it will propose to halt air travel from southern Africa over growing concern about a new Covid-19 variant that is spreading there, as the U.K. said it will also temporarily ban flights from the region.

The bloc “will propose, in close coordination with Member States, to activate the emergency brake to stop air travel from the southern African region due to the variant of concern,” European Commission President Ursula Von der Leyen said in a tweet.

The move comes one day after the EU revised its rules to facilitate and harmonize travel within and into the bloc, a recommending a 9-month time limit for the validity of Covid-19 vaccinations without a booster.

Scientists are still trying to determine whether the new variant, called B.1.1529, is more transmissible or more lethal than previous ones, but it does have the most mutations of any strain yet identified. That’s raised concerns inside South Africa and internationally, with authorities fearing a wave of cases that could increase pressure on already strained health-care systems.

The U.K.’s travel restrictions go into effect at noon Friday and are a precautionary measure to keep the spread of the new variant in check, Health Secretary Sajid Javid said. The six African countries will be placed on the U.K.’s red list as of Sunday, requiring travelers to quarantine in hotels upon arrival.

The moves are the freshest blow to the airline industry, which was just starting to recover from earlier travel restrictions.

Helge Braun, the chancellery minister in Germany’s outgoing government, said he expects that flights to and from southern Africa will be halted. The issue will be discussed later Friday with the country’s RKI public-health institute, Braun said in an interview with ARD television.