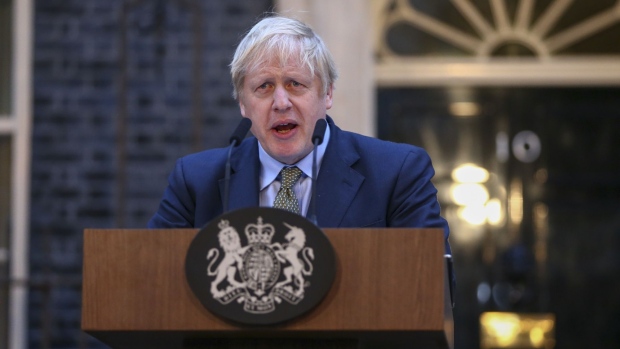 Boris Johnson, U.K. prime minister, delivers a speech outside number 10 Downing Street in London, U.K., on Friday, Dec. 13, 2019. Johnson won an emphatic election victory that redraws the political map of Britain and gives the prime minister the mandate he needs to pull the U.K. out of the European Union next month. , Bloomberg

(Bloomberg) -- U.K. Prime Minister Boris Johnson’s plan to stick to a 2020 Brexit transition period revives the risk of the country’s ties to the European Union being severed disruptively, according to the bloc’s chief civil servant for trade policy.

Sabine Weyand, director general for trade in the European Commission, the EU’s executive arm, cautioned that Johnson’s intention to prevent any prolongation of the Brexit transition period beyond 2020 would require the bloc to plan accordingly.

“We are well advised to take seriously that the U.K. does not intend to go for an extension of the transition,” Weyand told a European Policy Centre conference on Tuesday in Brussels. “We need to be prepared for that. And that means that, in the negotiations, we have to look at those issues where failing to reach an agreement by the end of 2020 would lead to another cliff-edge situation.”

The U.K. is on course to leave the EU by Jan. 31 after Johnson scored an overwhelming victory in national elections last week on a pledge to “get Brexit done.”

U.K. parliamentary approval of a hard-fought withdrawal agreement between Britain and its 27 EU partners would trigger a transition phase until the end of 2020. During this period, the economic status quo would be maintained while both sides negotiate on their future trade, political, security and other relations.

Under the Brexit deal, which Weyand helped craft in her previous commission position, the transition phase could be prolonged by as long as two years. Such a decision would have to be taken by mid-2020.

While the EU has said its ties to post-Brexit Britain should prevent any tariffs and quotas from emerging, top officials in the bloc have indicated that the timetable for wrapping up negotiations with the U.K. by end-2020 is too tight. EU officials have also stressed the need for post-Brexit Britain to avoid undercutting the bloc’s rules promoting social and environmental protection and limiting subsidies to companies.

“We will wait and hear from the U.K. how they want to handle that,” Weyand said. “The ambition for duty-free, quota-free trade under a free-trade agreement has to come accompanied by a level playing field.”

To contact the editors responsible for this story: Ben Sills at bsills@bloomberg.net, Raymond Colitt, Richard Bravo