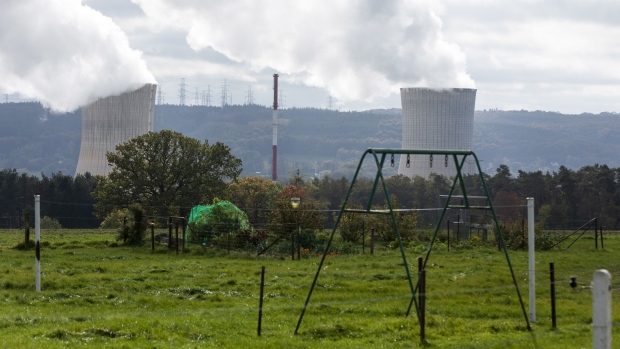 Cooling towers at the Tihange nuclear power station, operated by Engie SA, in Huy, Belgium, on Tuesday, Oct. 26, 2021. As recently as 2000, Europe generated almost a third of its electricity from nuclear fission, the highest proportion of any region. Photographer: Thierry Monasse/Bloomberg , Bloomberg

(Bloomberg) -- The European Union is considering allowing some natural-gas and nuclear energy projects to be labeled as green investments -- as a temporary measure -- in a move that could help the shift to net zero but will also upset environmentalists.

The European Commission is weighing whether to classify as sustainable investment in gas plants that replace coal and emit no more than 270 grams of carbon dioxide equivalent per kilowatt-hour, according to two people with knowledge of the matter. The projects would have to be finalized by 2030, said the people, who asked not to be identified as the talks on the proposal are private.

The design of the EU investment classification system, known as taxonomy, is closely watched by investors worldwide and could potentially attract billions of euros in private finance to help the green transition. The challenge is to ensure the decision on nuclear and gas gets political support, while avoiding the risk of greenwashing, or overstating the significance of emissions cuts.

The commission, the EU’s executive arm, plans to unveil the rules “in the near future,” its spokesman said on Tuesday. He declined to elaborate on the details of the proposal.

Covering almost every sector of the economy, the taxonomy aims to guide investors to clean projects. The decision on whether it should include gas and nuclear power was delayed in April following warnings by some investors, governments and environmental activists that such an addition could undermine the credibility of the system.

Giving a temporary green label to gas projects with emissions not exceeding 270 grams of CO2 equivalent could facilitate investments in cleaning up coal-based district heating systems in countries such as Poland. That’s an argument often raised by East European politicians.

The inclusion of some nuclear energy projects in the taxonomy would help attract private finance in nations from France to the Czech Republic, which plan to rely on atomic power in their transition to net-zero emissions.

Europe wants to become the world’s first continent to reach carbon neutrality by the middle of the century under the Green Deal, a sweeping overhaul that aims to accelerate pollution cuts in all areas from energy production to transport.

After a meeting of the bloc’s leaders last month, European Commission President Ursula von der Leyen said that while the EU needs more renewable and clean energy, it also requires “a stable source, nuclear energy, and during the transition, also natural gas.”

Yet for some investors and environmental lobbies, classifying gas or nuclear projects as green would harm the entire sustainable investment rulebook.

“While these sectors may be needed in the short term to secure energy supply, their inclusion would alter the nature of the EU Taxonomy from a list of sustainable activities to a list of transitional activities,” Eurosif, a Brussels-based association that advocates for sustainable investment in Europe, said in a statement earlier this week.