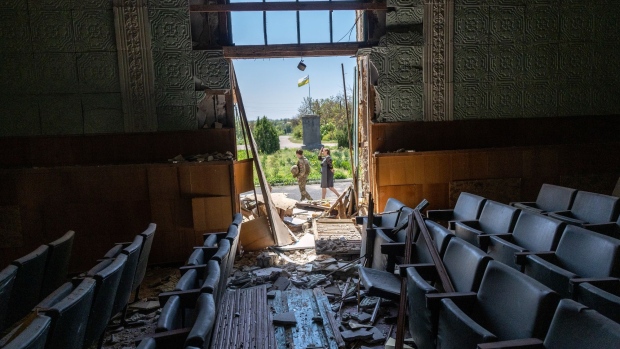 Ukrainian Army Lt. Karyna Skubak, 24, and village leader Dina, 62 walk past a bomb-damaged auditorium in a town which was, until recently, occupied by Russian forces in Kherson Oblast on May 08, 2022 in Zagradivka, Ukraine. , Photographer: John Moore/Getty Images

(Bloomberg) -- The European Union will propose issuing joint debt and explore using proceeds from assets that were seized from sanctioned oligarchs to fund the reconstruction of Ukraine.

The European Commission considers the scale of what will be required to be beyond the bloc’s capacity, and will propose on Wednesday to also use fresh grants coming from member states and third countries, according to a draft proposal of the EU’s plan seen by Bloomberg.

“Given the scale of the loans that are likely to be required, the commission could also be authorized to raise the funding for the loans on capital markets on behalf of the EU,” according to the draft.

The EU’s executive arm will propose a financial package, in coordination with allies and multilateral organizations, to help cover Ukraine’s financial gap of $15 billion over the next three months. Ukrainian foreign affairs minister, Dmytro Kuleba, told his EU counterparts on Monday that the reconstruction bill could reach 1 trillion euros ($1.1 trillion), according to people familiar with the discussion.

The commission will offer Kyiv between 7 billion euros and 9 billion euros in loans to finance the government’s pressing bills, as part of the package still being discussed, the people said. Member states will offer fresh guarantees to allow the bloc to offer long-term loans, while grants from the EU budget will subsidize interest payments, according to the draft proposal.

For the long-term reconstruction, the commission will propose setting up a facility dubbed “RebuildUkraine” to channel all the resources.

As part of the initiative, the EU will explore using seized assets from Russian individuals sanctioned since the war in Ukraine started. German Finance Minister Christian Lindner said in an interview with several European newspapers that Berlin was ready to consider seizing Russian central bank reserves abroad and using the money to finance the reconstruction.

The EU is aware that it will have to finance the lion’s share of Ukraine’s reconstruction over the next ten years or longer. The effort should combine EU funding, member states’ contributions and the support of European financial institutions including the European Investment Bank, an EU official said.

The bloc’s proposal will come as the US calls for a new Marshall plan to rebuild Ukraine, mirroring Washington’s massive program for Europe after World War II. “Eventually, Ukraine will need massive support and private investment for reconstruction and recovery, akin to the task of rebuilding in Europe after 1945,” US Treasury Secretary Janet Yellen said in a speech in Brussels on Tuesday.