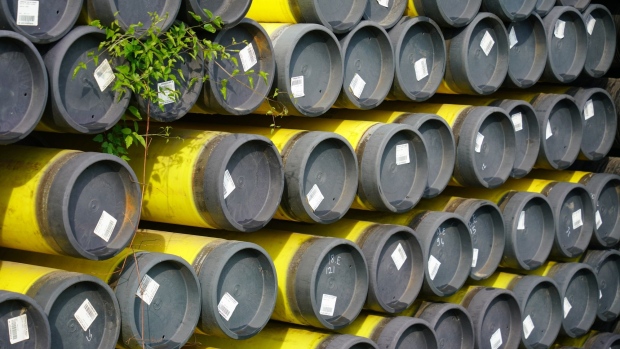 Capped segments of pipe for the Aleksandrovac-Novi Pazar-Tutin natural gas pipeline, operated by Srbijagas JP, stacked at the gas supply landing site near Novi Pazar, Serbia, on Tuesday, May 17, 2022. Serbia plans to replace at least 40% of its gas imports from Russia with other sources once its new gas pipe link to Bulgaria is completed in Sept. 2023, said Energy Minister Zorana Mihajlovic. Photographer: Oliver Bunic/Bloomberg , Bloomberg

(Bloomberg) -- The European Union is working on a deal to import Israeli gas through Egypt as the bloc rushes to reduce its reliance on Russian supplies.

The fuel would be converted to liquefied natural gas at Egyptian processing plants before being shipped to the EU, according to documents seen by Bloomberg. An agreement would open up a new market for Israel, where domestic gas prices are much lower than the rates it can charge in Europe.

Vladimir Putin’s invasion of Ukraine sparked international condemnation and a move by buyers of Russian gas to secure alternative supplies. Since the EU imported about 40% of its gas from Russia last year, it will need to tap multiple sources of the fuel -- as well as raising renewables output -- to meet demand.

As part of a potential memorandum of understanding, the EU, Israel and Egypt would also increase collaboration on clean energy projects, the documents showed. Any eventual deal would require the backing of EU member states.

The European Commission didn’t immediately respond to a request for comment.

Israel’s gas mostly serves the local market as well as neighboring Egypt and Jordan. Sending fuel to Europe would involve Egypt’s liquefaction plants in Idku and Damietta. That’s generally seen as a more viable option for the gas-rich East Mediterranean region than new pipelines, which would be costly and take years to build.