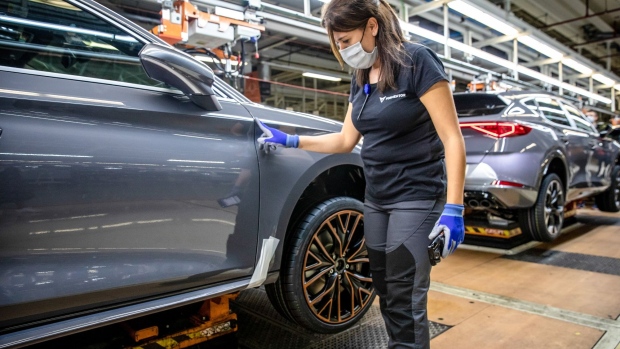 A worker checks the bodywork on a Cupra Formentor automobile on the production line at the Seat SA, a unit of Volkswagen AG, Martorell plant near Barcelona, Spain, on Tuesday, Sept. 29, 2020. European car sales plunged by nearly a fifth in August, dashing hopes that the industry was starting to recover from the pandemic and suggesting that the market could remain depressed through year-end. Photographer: Angel Garcia/Bloomberg , Bloomberg

(Bloomberg) -- Euro-zone companies have returned to broad-based growth for only the second time since the pandemic started, with factories booming and confidence high that vaccinations will soon end the coronavirus crisis.

Germany, Italy, Spain and Ireland all saw business activity rise last month and France halted its contraction, according to IHS Markit’s latest survey of purchasing managers. Those nations, the only ones for which the data provider polls both manufacturing and services companies, account for more than three-quarters of the euro-area economy.

It’s the first time none of the countries had a shrinking private sector since a short-lived rebound in July, before the second wave of the pandemic. Factory output increased in March at the fastest pace in almost 24 years of data collection, and the service sector came close to stabilizing.

The report adds to evidence that companies and consumers are looking past the region’s slow vaccine rollout and renewed lockdowns, betting that a ramp-up in inoculations will allow the start of a return to normality. In the meantime, governments have extended fiscal support, a 750 billion-euro ($890 billion) joint recovery fund is due to kick in from June, and the European Central Bank has accelerated monetary stimulus to keep borrowing costs low.

“Firms’ expectations of growth are running at the highest for just over three years amid growing hopes that the vaccine roll-out will boost sales in the coming months,” said Chris Williamson, IHS Markit’s chief business economist. “Companies and their customers are looking ahead to better times, but have also increasingly adapted to life with the virus.”

The survey also showed that companies are reporting rising costs because of supply-side delays, but are increasingly able to pass them onto customers.

The euro zone is lagging way behind the U.S. and U.K. in the pace of vaccinations, and is currently being hit by a third wave of infections. Extended restrictions probably pushed the economy into a contraction last quarter, cementing a double-dip recession.

Still, Goldman Sachs Group Inc. economists said in a report this week that the health situation “looks better than the public debate might suggest.” They predict euro-area gross domestic product will expand 5.1% this year, and said it is “easy to imagine” that being beaten if vaccinations rescue the southern European tourist season and manufacturing-dependent nations such as Germany benefit from the global upturn.

ECB Governing Council member Pierre Wunsch told Bloomberg in an interview on Tuesday that he’s “pretty optimistic” for the economy, and set his sights on the moment when talks can begin on how to unwind crisis measures without too much market disruption.

“A lot of the conditions are met for a sustained recovery when we get out of lockdown, and if it’s not enough then we’ll have to do more,” he said. “I hope that at some point we’re going to discuss an exit, because it will show that our policy is effective. But exit is never a piece of cake and it’s never completely smooth.”