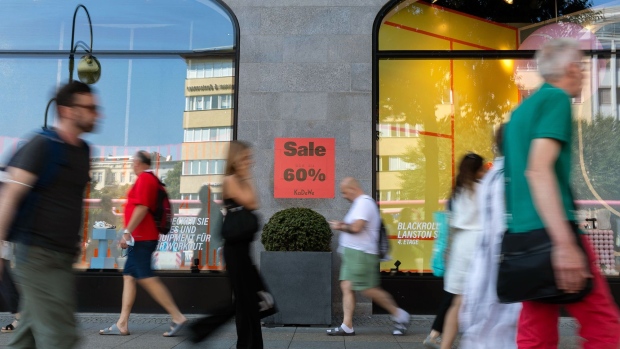 Shoppers pass a 'sale' sign outside a KaDeWe luxury department store in Berlin, Germany, on Tuesday, Aug. 9. 2022. German Finance Minister Christian Lindner said he will look at ways of exempting the country's looming gas levy from sales tax in an effort to at least partially ease the burden on consumers from soaring energy costs. Photographer: Krisztian Bocsi/Bloomberg , Bloomberg

(Bloomberg) -- Private-sector activity in the euro zone contracted for a third month as record inflation erodes demand and force some firms to limit production.

Barring months where there were lockdowns, an index of purchasing managers compiled by S&P Global slumped to its lowest level since 2013. The downturn accelerated in manufacturing and services, with new orders falling and the outlook bleak.

Across the 19-nation economy, soaring costs have put a brake on the pent-up demand that followed the pandemic, while Russia’s stalled energy shipments are forcing households and industry to brace for potential outages this winter.

Consumer confidence is at a record low, and Friday’s report shows companies are lowering their outlooks and holding back on hiring. It’s not just Europe: data due later Friday are set to show a separate PMI for the US remaining well below the 50 level that separates expansion from contraction.

Surging energy prices and the rising cost of living are “not only hitting demand but also limiting manufacturing production and service-sector activity in some cases,” Chris Williamson, an economist at S&P Global, said Friday in a statement.

The early PMI readings suggest the euro region’s economy will shrink by 0.1% in the third quarter -- a rate that’s likely to be even steeper in the three months through December, according to the report.

“A euro-zone recession is on the cards,” Williamson said. “Germany is facing the toughest conditions, with the economy deteriorating at a rate not seen outside of the pandemic since the global financial crisis.”

One potential bright spot was supply bottlenecks appearing to continue easing. Surging energy costs, however, have reignited inflation pressures that had looked like they were about to cool.

The European Central Bank has already embarked on two interest-rate hikes, with officials reiterating their determination to reign price expectations in.

“The challenge facing policy makers of taming inflation while avoiding a hard landing for the economy is therefore becoming increasingly difficult,” Williamson said.