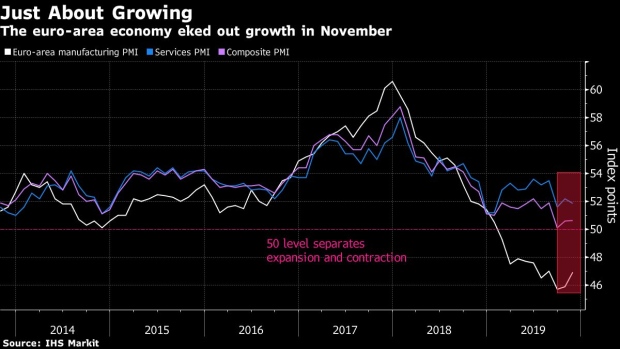 The euro area keeps just about expanding amid mounting evidence that a manufacturing slump has started to spread to other parts of the economy.

While IHS Markit’s composite Purchasing Managers’ Index stabilized at 50.6 in November, above the flash reading of 50.3, it points to growth of only 0.1% in the fourth quarter. That would be the weakest since the 19-nation region emerged from recession in 2013.

In a worrying development, momentum in services -- a key driver of growth this year -- is waning. Factory output contracted for a 10th straight month.

The report “indicates a near-stagnant economy,” said Chris Williamson, an economist at IHS Markit. Manufacturing is “a major drag,” and “the service sector is also on course for its weakest quarterly expansion for five years, hinting strongly that the slowdown continues to spread.”

Orders stalled in November, with foreign demand contracting for a 14th month. Weak exports have weighed on German companies in particular. Private-sector activity in Europe’s largest economy contracted for a third month.

In a sign that the region’s manufacturing slump may be starting to ease, factories signalled the decline in production was the smallest since August. Companies continued to hire and confidence about the future improved.

At the same time, the survey indicated “some of the weakest price pressures we’ve seen in recent years, which threatens to keep inflation well below the ECB’s target in coming months,” said Williamson.

The European Central Bank will hold its first monetary-policy meeting under President Christine Lagarde next week. Fresh quarterly forecasts will offer a glimpse of whether officials have done enough to bolster economic growth and consumer prices, or whether they need to step up calls on governments to complement their effort with fiscal stimulus.

--With assistance from Mark Evans and Simbarashe Gumbo.