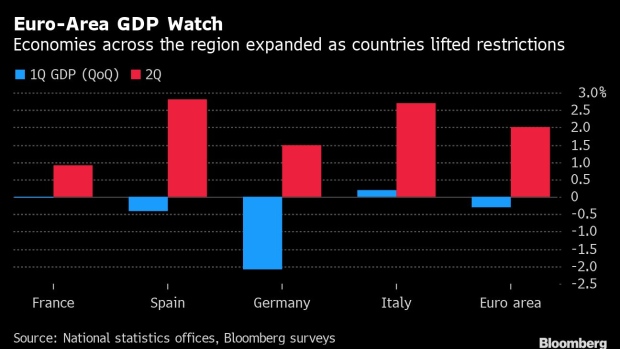 A closed retail store in Sant Jaume Square in Barcelona, Spain, on Monday, Nov. 2, 2020. The Spanish central bank forecasts that the economy could shrink as much as 12.6% this year. Photographer: Angel Garcia/Bloomberg , Bloomberg

The euro-area economy brushed off the impact of its crippling winter lockdowns, with strong rebounds in Spain and Italy spurring better-than-expected growth in the region in the second quarter.

Gross domestic product expanded 2%, topping the 1.5% estimate of economists in a Bloomberg survey. The rebound was driven by southern European countries, putting them in the rare position of being the engine of growth. Germany, the region’s largest economy, expanded less than forecast as supply-chain disruptions weighed on key industries such as carmakers.

The recovery, which helped the currency union exit its second recession in a year, is set to accelerate as restrictions are lifted unless supply bottlenecks or resurgent infections throw a spanner in the works. The European Central Bank has warned that the region has a “long way to go” before the damage caused by the pandemic is fully repaired.

In the second quarter, Spain’s GDP grew 2.8%, above the 2.1% estimate. The surprise was more impressive in Italy, where the 2.7% expansion was more than double what economists had anticipated.

“Southern European economies rebounded with particular force,” said Maeva Cousin, senior economist at Bloomberg Economics. As they have up to now lagged the rest of the region, faster growth in the second quarter “is only helping to bridge some of this gap and implies they still have further room for expansion,” she said.

France’s output rose 0.9% in the three months, a touch ahead of expectations. Finance Minister Bruno Le Maire said the figures put the economy on track to meet the government’s 6% growth forecast for 2021.

“Everything is picking up again: consumer spending, investment, confidence,” he said on France Inter radio.

Separate figures on Friday showed euro-area unemployment unexpectedly declined, while inflation in July jumped to 2.2%, the fastest since 2018.

In addition to services and consumer spending coming back to life, countries in southern Europe from Greece to Italy are betting on billions of European Union funds to turn the page on years of economic malaise and debt crises.

Italian Finance Minister Daniele Franco said this month that growth exceeding 5% seems reachable this year and that the economy could regain its pre-pandemic size by the third quarter of 2022.

In Germany, output increased just 1.5% in the second quarter, falling short of predictions for 2% because of the supply issues that have hampered multiple businesses.

“The only good thing about these supply chain frictions is that eventually, they will end,” said Carsten Brzeski, an economist at ING. “As order books are richly filled and inventories are still low, activity in the German industry will accelerate.”