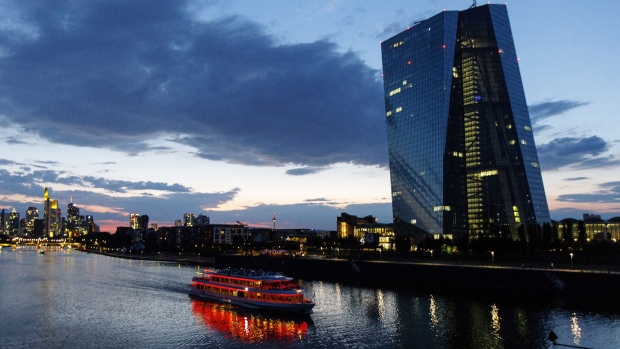 The euro area can’t spend its way to sustainably higher inflation, according to a new study, raising a question mark over whether urging countries to deploy fiscal stimulus is actually effective.

With the European Central Bank struggling to achieve its price-stability objective despite massive monetary stimulus, both President Christine Lagarde and her predecessor, Mario Draghi, have called on governments that have the leeway -- and the euro-zone as a whole -- to boost expenditure.

But Daniel Gros and Angela Capolongo of the Center for European Policy Studies in Brussels calculate it wouldn’t do much good. Using a variety of models, they looked at what an increase in discretionary spending equal to 1% of gross domestic product would mean for the economy.

The result was disappointing: there would be “essentially no significant impact” on price pressures and interest rates would be lifted by just 14 basis points. To raise the ECB’s deposit rate, now at minus 0.5%, to zero for a short time, a fiscal expansion of 3% to 4% of GDP would be needed, they said.

“The overall conclusion is clear. One would need a very large fiscal deficit to have even a modest impact on inflation or interest rates,” Gros and Capolongo wrote in a post for policy portal VOX on Tuesday. “Fiscal policy ‘doing its part’ cannot bring inflation closer to 2%.”

Meanwhile, a paper published by Germany’s Bundesbank has shone a light on euro-area working practices and their implications for consumer prices.

The research found that compared with other developed economies, the currency bloc has a “unique” combination of highly pro-cyclical labor productivity, low unemployment variability and stable inflation.

Put simply, if demand rises then companies meet it by producing more in the same amount of time -- they don’t tend to add workers or extend hours much. If demand falls then output is cut but the workforce isn’t necessarily trimmed back much.

That’s in contrast to countries such as the U.S. and U.K., where labor-market frictions are lower. The result is that euro-area unemployment is more stable, though high in many member states.

Unfortunately for the ECB, companies’ ability to boost productivity to meet additional demand means their costs don’t rise much, leaving them less of an incentive to raise prices.

--With assistance from Jana Randow.

To contact the reporters on this story: Catherine Bosley in Zurich at cbosley1@bloomberg.net;Paul Gordon in Frankfurt at pgordon6@bloomberg.net

To contact the editors responsible for this story: Fergal O'Brien at fobrien@bloomberg.net, Andrew Atkinson, Paul Gordon