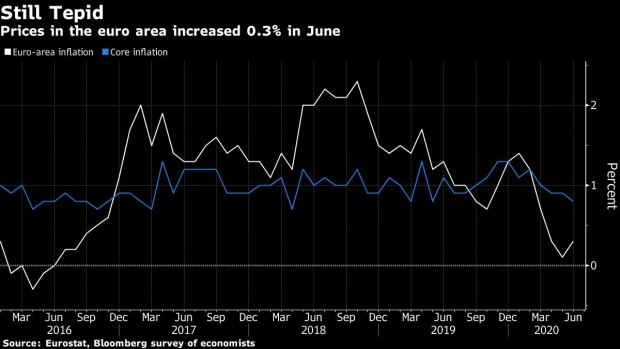 (Bloomberg) -- Prices in the euro area saw a slightly stronger-than-expected pickup in June, when economies across the bloc allowed more businesses to reopen.

Inflation in the 19-nation currency region came in at 0.3%, higher than economists’ median estimate. But with the rate much closer to zero than the European Central Bank’s goal of just under 2%, policy makers have warned of the effects the pandemic might have on demand -- even pointing to a risk of falling prices if support measures fall short.

June’s inflation data offer the most detailed indication of underlying price pressures since the crisis erupted, according to Bloomberg Economics, as large categories of expenditure were previously restricted by containment measures across much of the region. Core inflation -- a gauge that strips out the effect of more volatile food and energy prices -- slowed to 0.8% in June, Eurostat said.

The region’s economy is set to contract more than 8% this year, and ECB President Christine Lagarde has argued that the coronavirus crisis may change parts of how it functions forever.

While confidence is slowly returning to businesses and consumers across the euro area, the continued spread of the disease in parts of Europe, as well as in the Americas, serves as a cautious reminder of how quickly the situation could deteriorate. Hundreds of thousands of workers have already lost their jobs, despite massive stimulus campaigns to keep the economy afloat.

The inflation picture was mixed across member states. In Germany, prices accelerated faster than economists had expected, with higher costs at service providers subject to new hygiene requirements, such as hair salons and restaurants. The French rate decelerated to a four-year low after food prices fell sharply from the previous month and those for services slowed.

In the euro area, prices for energy and services rose strongly from May. A more detailed breakdown will be available when Eurostat publishes its final reading on July 17.