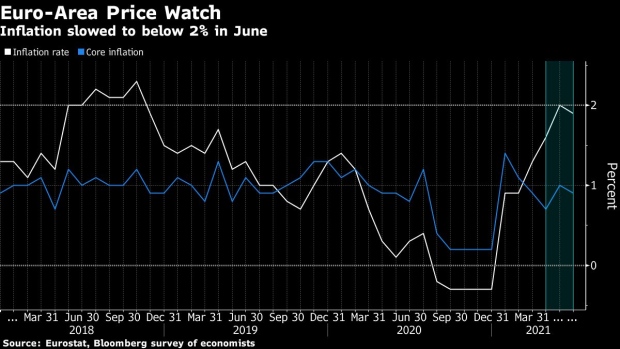 (Bloomberg) -- Euro-zone inflation cooled in June to temporarily ease concerns that the bloc’s economic reopening will fuel price growth, though economists expect the pressures to gather pace again in the second half of the year.

Consumer prices rose 1.9% from a year earlier, down from a more than two-year high of 2% in May. Core inflation, a less volatile measure that excludes volatile items such as food and energy, slowed to 0.9%.

Europe’s recovery is gathering steam as infections decline, allowing shops and restaurants to reopen and summer travel to get under way. With businesses also battling supply shortages though, concerns have mounted in some quarters that steep price gains will start to become entrenched.

Bloomberg Economics predicts that upward pressures will also resurface from August as the recovery strengthens, and because of statistical effects such as a comparison with a German sales-tax holiday last year.

Most European Central Bank policy makers say the price pickup is temporary, and high unemployment and a weak medium-term outlook justifies continuing their ultra-loose monetary stimulus. The institution has pledged to keep buying bonds at an elevated pace over the summer, and President Christine Lagarde has called on governments to maintain fiscal support well into the recovery.

Still, Bundesbank President Jens Weidmann warned this week that upside risks to the inflation outlook “predominate.” German data earlier on Wednesday showed unemployment dropped in June by almost twice as much as expected, and euro-area economic confidence is at the highest level in more than two decades.