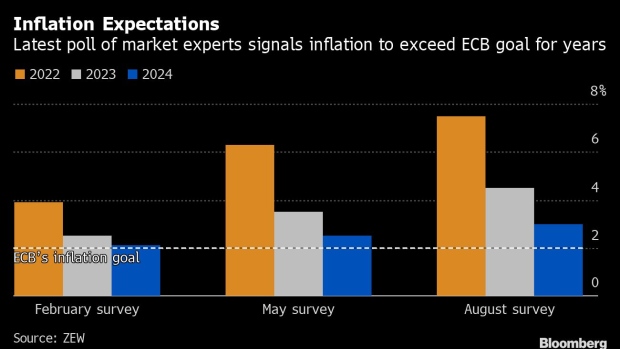 (Bloomberg) -- Inflation in the euro area is likely to exceed the European Central Bank’s goal by significantly more than previously expected, according to a survey of financial market experts.

A poll by the ZEW Institute in Mannheim, Germany, signaled far less optimism on the price outlook than the ECB’s own in-house projections, which show the inflation rate dropping to just over its aim of 2% by 2024. The respondents, meanwhile, have continuously revised up their forecasts in recent months.

Price growth is seen averaging 7.5% this year, before dropping to 4.5% and 3% in 2023 and 2024, according to the report published Friday. ZEW said that most experts cited energy and commodity prices as reasons for their upward revisions, but 43% also considered the ECB’s too-expansive monetary policy as driving up inflation pressures.

A separate survey of consumer expectations released earlier this month showed a similar discrepancy between households’ views and the ECB’s. That report put an estimate for price growth in three years at 2.8%.