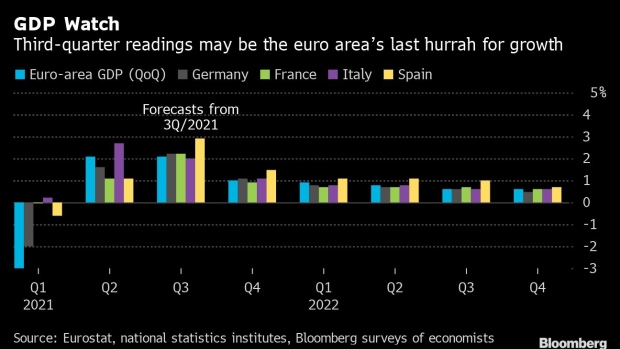 The euro area’s final spurt of growth before logistics logjams and surging gas prices stunt its momentum will be on display in data this week.

Although Friday’s gross domestic product report is likely to show robust performance in the third quarter, a double whammy of supply and demand shocks means the economy will now take longer to recover its pre-pandemic level of output. Inflation data released concurrently will also reveal the squeeze hitting the region’s consumers.

The European Central Bank insists the current price spike will ease, though officials’ most up-to-date view will be revealed at a decision on the eve of those reports along with their assessment of an economy whose snapback from the pandemic is going awry.

ECB President Christine Lagarde highlighted the threat this month when she said that “the global economy could increasingly be a source of shocks for Europe rather than a stabilizer.” In Germany, the growth motor of the region, officials have already downgraded their outlook after carmakers scaled back production due to semiconductor shortages.

“We were always going to see a slowdown to the spectacular growth rates that we saw after reopening, but of course these are additional drags,” said Nick Kounis, an economist at ABN Amro. “It does slow progress down in terms of let’s say, a full recovery.”

“The euro area probably recovered at a robust pace in the third quarter, official data on Friday should show. Growth is likely to slow in the final quarter of the year as soaring inflation curbs consumer spending and severe disruption to supplies hits factories, especially in Germany.”

Friday’s third-quarter data may still be impressive to behold, with a stream of robust numbers around the region. They start with French growth at 7 a.m. in Paris, which forecasters anticipate doubling to 2.2% from 1.1% in the prior three months.

Of the largest four economies, only Italy is expected to show slowing, though with output still up 2%. The euro-zone report at 11 a.m. may reveal similar expansion to the previous quarter, with economists forecasting 2.1%.

Inflation data for October probably accelerated further however. While the median prediction is for 3.7%, the fastest since 2008, Natixis SA reckons the surge could be half a percentage point higher.

The Bundesbank expects price increases to keep spiking in Germany before they eventually ease, signifying an intensifying squeeze on living costs that is playing out elsewhere too. France has already announced a one-off payment of 100 euros ($116) to lower-paid workers to cushion the blow.

Accompanying the inflation shock are supply bottlenecks already being felt in indexes of purchasing managers. A gauge of business activity in the region slipped to its slowest in six months in October, with optimism clouded by logistics concerns.

Economists surveyed by Bloomberg expect such effects to markedly moderate expansion in the final quarter of the year, with the pace of output seen halving to 1%.

In a hint of what the ECB will say, Bank of Italy Governor Ignazio Visco acknowledged the headwinds on Bloomberg Television last week, even though he cautioned that the euro-area economy is still in a much better shape than anticipated.

“It has sightly softened in the last few weeks,” he said. “The impact of the bottlenecks and shortages is there.”

What could still help absorb the price squeeze and slowing growth is a hoard of almost 400 billion euros accumulated by consumers during lockdowns.

“I would not be overly concerned,” said UniCredit economist Marco Valli. “Households have this big buffer thanks to excess savings that will provide them with a bit more of a cushion compared to previous energy shocks.”