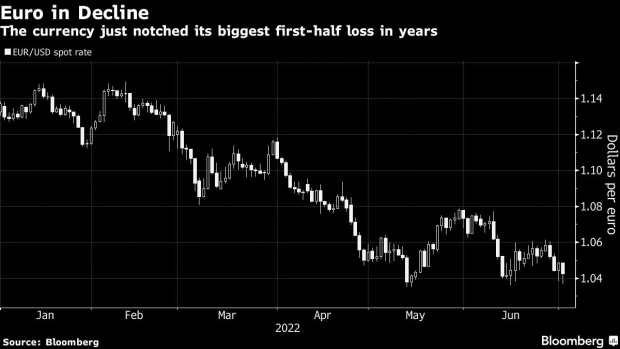 (Bloomberg) -- There’s more pain ahead for the euro even after the currency’s worst start to a year since 2015, according to Bank of America Corp. strategists.

With the European Central Bank looking “cautious” even as other central banks around the world like the US Federal Reserve jack up rates in increments of 50 basis points or more, the common currency could continue to be at a disadvantage against the dollar through the northern summer, strategists led by Athanasios Vamvakidis said in a note on Friday. They expect the euro to “remain under pressure” versus the greenback over the next couple months.

Risks are mounting that central bankers will be forced to tear up their playbook of the last 20 years to confront the prospects of sticky inflation and slower growth. That was a key message from Federal Reserve Chair Jerome Powell and his European counterparts at the ECB’s annual forum in Sintra, Portugal, this week. Yet it’s not yet clear that ECB President Christine Lagarde and her colleagues are willing to adopt the kind of aggressive policy path that the Fed and other global peers are embracing.

Data this week showed euro-area inflation surged to a fresh record, surpassing expectations and bolstering calls for the kind of aggressive interest-rate increases being deployed by central banks across the world. At the same time, though, markets are clearly showing more concern about the global growth picture, with increasing chatter about the risk of recession.

The euro extended its slide on Friday, falling around 0.6% to $1.0423. That comes after a brutal first half which saw the currency tumble by 7.8%.

The Bank of America strategists are also bearish on the prospects for the yen, at least over the summer. They expect that the Japanese currency will remain under pressure for now and also over the longer term, but predict a possible correction in the fourth quarter that gives it a cyclical boost.