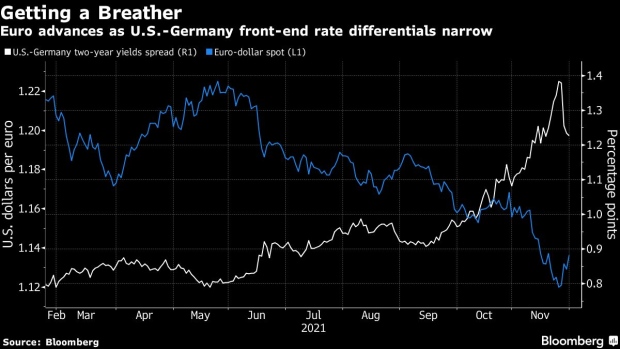 Euro bears are sticking to bets that the longest run of monthly declines in more than two years isn’t over yet.

Concern the omicron strain will sidestep existing vaccines has fueled bets the Federal Reserve and other major central banks will keep rates low to support the economy. That’s reducing the appeal of the dollar and helping the euro rebound from the lowest level in 16 months.

What’s next isn’t so simple. If the jitters abate, markets would likely see a return to the recent status quo, with the euro extending its long slide on perceptions the European Central Bank is trailing a global move toward tighter monetary policy.

If the concerns intensify, however, then the pull of the U.S. dollar as a haven investment could prove too strong. That leaves a narrow path for a sustained rally: virus fears would need to keep rate differentials in check, without tipping over into full-blown panic.

“It is not clear why FX investors would seek ‘safety’ in anything but the U.S. dollar,” wrote BMO Capital Markets strategists, led by Greg Anderson, who see the euro trading weaker in the coming three months.

They point to March 2020, when Covid-19 was ripping through western nations. The dollar sank and long positions on the greenback were curbed as U.S. yields tumbled and the euro rallied.

“Once that adjustment had run its course, the dollar rebounded,” the BMO strategists wrote.

On Tuesday, traders resumed bets that global central banks will pursue a slower pace of interest-rate hikes after Moderna Inc. executives spooked markets by suggesting the omicron variant could require a new vaccine.

That sentiment has dealt an unexpected blow to the popular wager on a weaker euro, which assumes other major central banks will lift rates far sooner than the ECB. The shared currency had fallen about 9% from its May peak and touched $1.1186 last week.

Adding to the recent euro gains, carry trades involving risky emerging-market currencies are being unwound. The euro has been a popular funding currency due to the ECB’s negative interest rates. And positioning is playing a role too as the euro’s sudden bounce took investors betting the currency would fall by surprise.

Asset managers’ net positions turned the least positive on the euro since May 2020, according to data from the Commodity Futures Trading Commission for the week through Nov. 23. Hedge funds have also stayed largely underweight in recent weeks -- hence the currency was at risk of a short squeeze stronger, according to Audrey Childe-Freeman, Bloomberg Intelligence’s chief G-10 currency strategist.

For now though, the euro bears are sitting tight.

Jordan Rochester, a strategist at Nomura, remains bearish on the euro and sees it weakening to $1.10. “Annoyingly,” a risk off environment means the euro will go stronger against the dollar, “but it won’t last forever,” he said.