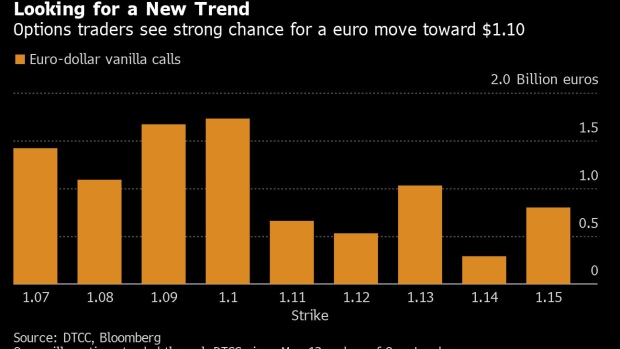 Lagarde said that the Governing Council is likely to start raising interest rates in July and exit sub-zero territory by the end of September. The euro extended an early advance and rose by as much as 1.2% to $1.0688, a level not seen since April 26. A popular bet in the options market is looking for the euro to extend its rally to $1.10.

Zero bond buying by the ECB by the end of the third quarter indicates that a 50 basis-point increase in the official rate will be the minimum by September, said Geoffrey Yu, senior foreign exchange strategist at Bank of New York Mellon. “And I wouldn’t even rule out a lift off in June or 50 bps in July,” he said. “Along with attractive valuations, this will help support the euro.”

Technically, the euro’s move sends a strong bullish signal, especially should it close the day above $1.0642, the high on May 5. Momentum indicators suggest the short-term outlook has shifted and a move toward the 55-daily moving average at $1.0791 could be in the making. This coincides with a test of the upper end of the bearish trend channel in place since February.

Options traders are positioning for such a move, and beyond. Since May 13, when the common currency hit its $1.0350 cycle low, options trades have been in favor for euro topside. According to data from the Depository Trust & Clearing Corporation, euro vanilla calls, in other words trades that pay out should the euro strengthen, accounted for 52.4% of the total interest.

Money markets now price in more than 110 basis points of ECB interest rate increases by year-end, pushing the yield spread between two-year US and German notes to its narrowest since mid-March.

Still, risk reversals, a barometer of market positioning and sentiment, show that the market isn’t fully convinced the euro is on a one-way street headed north, given that recession concerns and risk aversion could weigh on sentiment and support the greenback.

“The Fed continues to lead policy expectations by far, so it will take time for EUR/USD to move back to more adequate valuations. We have to bear in mind that growth risks remain stronger in Europe,” BNY Mellon’s Yu added.