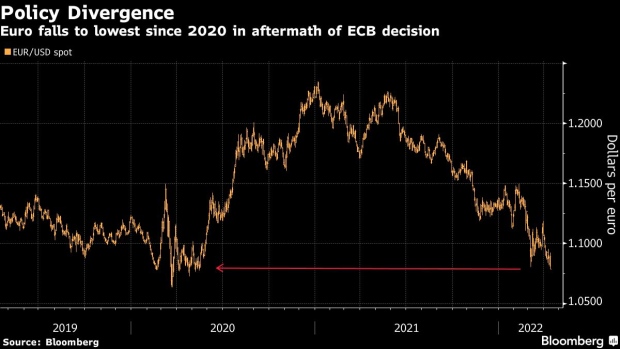 Since its creation over two decades ago, the euro has never posed a realistic threat to the dollar’s prime position in the global financial system. Photographer: Chris McGrath/Getty Images Europe , Getty Images

(Bloomberg) -- The euro sank to its lowest level against the dollar since May 2020 after the European Central Bank affirmed that its current plans to exit stimulus in the coming months were appropriate.

The common currency fell as much as 1% to 1.0782, breaking a previous low reached last month as Russia’s invasion of Ukraine intensified.

Money markets trimmed rate-hike bets on monetary tightening by the ECB in the wake of the decision, but are still pricing in quarter-point hikes in September and December that would bring the deposit rate to zero.

A strengthening dollar, fueled by market expectations of a swifter tightening of Federal Reserve monetary policy, has kept the euro-dollar pair under pressure in recent weeks. Traders have also been eyeing the possibility of further disruption to European energy supplies from Russia as a headwind to growth as well as the possibility of a win in the French election for the nationalist leader Marine Le Pen.