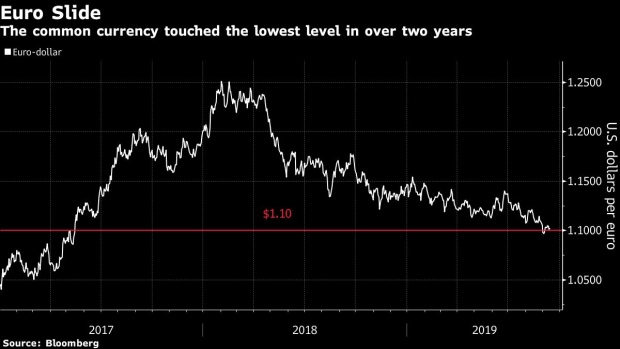 (Bloomberg) -- The euro dropped and bonds climbed after the European Central Bank announced a cut to interest rates and a fresh program of quantitative easing to support the region’s ailing economy.

The common currency held near a two-year low as the monetary institution said it would cut interest rates to -0.50% and restart its 2.6 trillion euro bond-buying program in November at a pace of 20 billion euros per month. It also said it would introduce a two-tier system for negative rate policy.

Bond yields across the euro area have dropped into negative territory this year amid expectations for more stimulus from the ECB in the face of growing geopolitical risks from Brexit to the U.S.-China trade war. The euro, meanwhile, touched its lowest level in over two years earlier this month.

To contact the editor responsible for this story: Ven Ram at vram1@bloomberg.net