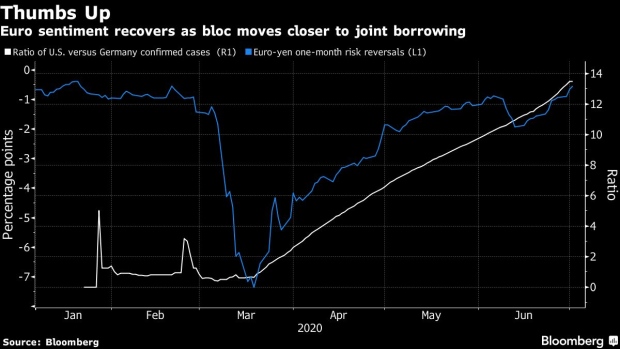 The currency completed its biggest two-month advance against the dollar and a trade-weighted index of its strength rose for a third quarter. At the same time, options are relaying optimism on multiple fronts -- signaling gains versus the greenback over the next three months, and a drop in bearish sentiment versus the yen, a traditional haven currency, to the lowest since January.

The latter in particular is an indication of confidence that governments in the euro area will continue to be quick to protect the public from a second wave, or an extended first wave, of the pandemic better than many other regions with lockdowns or social restrictions.

That in turn suggests a better chance of the region outperforming in terms of economic growth, potentially attracting larger capital inflows that would support the euro. And with bets the Federal Reserve will implement yield-curve control on the rise, coupled with the slim chance of rate cuts by the European Central Bank, interest-rate differentials aren’t potential headwinds for the euro.

Euro optimism isn’t limited to options. The spot market too is sending bullish signals in the form of two developing technical patterns versus the dollar.

The so-called golden cross formation on the daily chart suggests the common currency has the potential to challenge its June 10 high of $1.1422, which is backed up by Tuesday’s first close above the 21-monthly moving average since August 2018.

Still, expectations remain relatively low for such a move to happen soon, as shown by demand for options that pay out on large moves. That, in turn, suggests there are still risks that euro-bullish views may not pay out, should demand for havens return on renewed virus and trade-war concerns, or around the U.S. elections in November.

On Wednesday, the euro swung between modest gains and losses, following data that showed factories across the euro area recorded a stronger performance than initially reported in June.