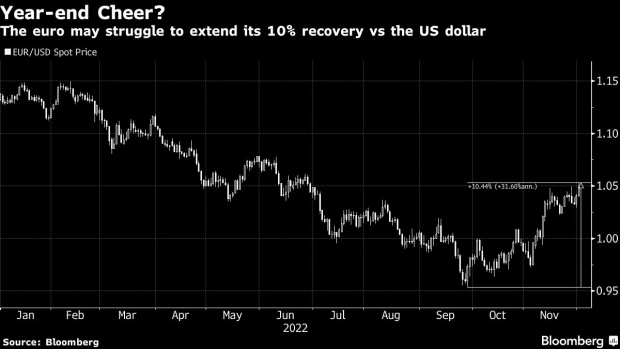 A customer purchases goods at chocolate store with a festive window display in Brussels, Belgium, on Thursday, Dec. 1, 2022. Belgium's gross domestic product (GDP) grew at an annualized pace of 0.2% in the third quarter of this year. , Bloomberg

(Bloomberg) -- After the euro’s best month since 2010, traders counting on a traditional year-end rally may be disappointed.

History shows the single currency tends to gain against the dollar in December. But after a surge of more than 5% in November, the bar for further seasonal cheer is much higher.

That’s even before investors consider an array of macroeconomic headwinds for the region as it braces for a potential energy crunch this winter. Throw in some major central bank meetings as well, and euro bulls have a lot of risks to navigate.

“The seasonal euro bias is strong but the rally in October and in particular November may mean the move has started earlier than usual,” said Derek Halpenny, a head of research at MUFG, who sees a drop back to parity for the euro in early 2023. “The fundamentals for a sustained selloff of the US dollar are not yet really in place.”

The euro soared last month as bets that the Federal Reserve will decelerate its hiking campaign weakened the dollar and investors speculated China will reopen its economy. Some data suggesting the pace of the euro area’s downturn has slowed also raised hopes that a widely expected recession may turn out to be less severe than initially feared.

Seasonal currency trends are often dismissed as mere coincidence, although the argument for time-specific flows is more plausible for December. It’s when investors wind up positions as liquidity evaporates going into the holiday season, while European end-of-year reporting requirements can trigger repatriation flows.

The euro has rallied in 15 of the 23 Decembers since its inception. That tots up to an average rally of 1.5% -- more than double the next-best month.

The historical performance may have partly been a by-product of Europe’s negative interest rates, says Simon Harvey, head of currency analysis at Monex Europe. There would be capital outflows from Europe as investors sought higher-yielding assets elsewhere, only for those flows to return home over year-end reporting periods.

But now, markets are grappling with a new regime of inflation and higher rates.

“This year will be interesting for two reasons: dollar strength has already been trimmed throughout November following October’s CPI release and the ECB has exited negative rates.”

Risks could rise mid-month, when the European Central Bank and the Federal Reserve are both expected to slow the pace of interest rate rises. If the Fed continues to flag upside inflation risks, it could prompt investors to return to the dollar at the expense of the euro. Further clues on inflationary pressures may come from next week’s data on US producer prices, jobless claims and sentiment.

“Given the proximity of key central bank decisions in the middle of the month, when liquidity will be starting to wane, a correction in the euro is still a realistic risk,” said Jeremy Stretch, head of G10 FX strategy at CIBC in London.

The weather too is increasingly seen as a major threat to the currency’s gains. There are signs that temperatures are poised to plunge in Northern Europe, testing the region’s preparedness for the winter amid restricted supplies since Russia’s invasion of Ukraine.

It’s a risk acknowledged even by euro bulls such as Nomura strategist Jordan Rochester. He expects a surge to $1.08 in mid-December before $1.10 is hit by end-January. Seasonality trends must be taken with a “pinch of salt,” he admits, viewing weather and energy prices as the main risk to his call.

“We would not put too much weight on seasonality alone. Rather, it’s likely to be the macro and flow factors that determine the next four weeks of price action,” he said, citing more positive European economic data and inflows into EUR exchange-traded funds. “We will need to closely monitor the weather forecast and natural gas futures.”

Currency moves in either direction could also be exacerbated as liquidity thins ahead of the year-end holidays, according to Brad Bechtel, FX strategist at Jefferies in New York. Moreover, trading floors this year may also be sidelined by matches for the football World Cup, which wraps up a week before Christmas, he added.

“That could mean a move towards 1.10 or even parity,” he said, while adding that the move towards 1.00 was the more likely option, given that he expected that the sell-off in the dollar will ease this month.

--With assistance from Vassilis Karamanis and Libby Cherry.