Stocks almost wiped out their losses, while bonds rose as traders assessed the latest developments after a wall of sanctions against Russia for the invasion of Ukraine.

The S&P 500 trimmed a drop that reached 1.6 per cent earlier in the day, while still notching its second month of declines -- the longest losing streak since October 2020. The technology-heavy Nasdaq 100 finished higher on Monday. In late trading, Zoom Video Communications Inc. tumbled after the remote-conferencing giant projected sales that fell short of Wall Street’s estimates.

Treasuries jumped, driving two-year yields near where they were before a steeper-than-expected inflation report earlier this month. The Swiss franc staged its biggest gain against the euro since 2018, and gold held near the more than 13-month high hit last week. Oil pared its advance as the U.S. and its allies considered releasing about 60 million barrels of crude from emergency stockpiles to quell supply fears. Bitcoin rallied.

The mounting sanctions against Russia are increasing the risk for investors that the nation’s stocks and bonds could be kicked out of major global benchmarks, effectively cutting them off from a big segment of the investment-fund industry. MSCI Inc. said it is consulting with clients to understand the implications of those sanctions for markets and could move to kick the nation’s assets out of its key equity gauges. At the same time, Goldman Sachs Group Inc. warned of the risk of Russian debt being removed from a widely followed JPMorgan Chase & Co. index. 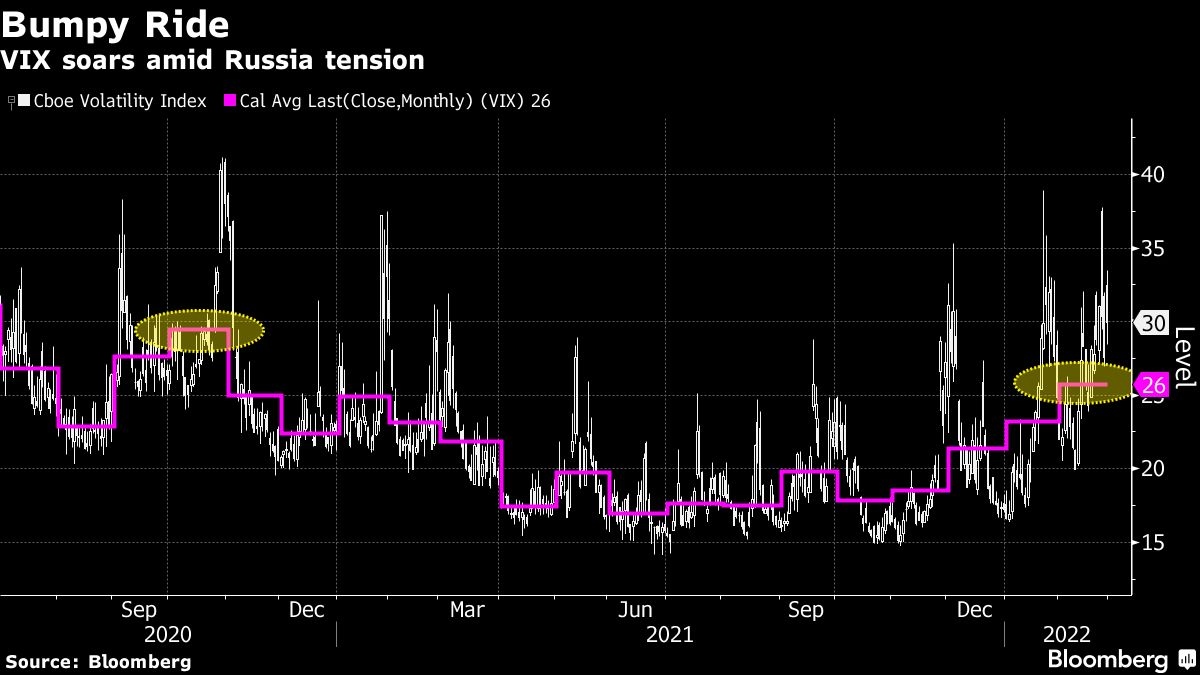 As Russia canceled trading of stocks in Moscow on Monday, London-listed shares of Russian companies cratered. Depositary receipts for lender Sberbank of Russia sank 74 per cent, the most on record, while retailer Magnit slid 80 per cent. Gas giant Gazprom dropped 53 per cent. Traders struggled to price the ruble, with the currency losing a third of its value in offshore trading at one point. Quotes were infrequent and volatile at the start of the session, with low liquidity making it difficult to match buyers and sellers.

Russia banned its residents from transferring hard currency abroad, as President Vladimir Putin sought countermeasures against countries imposing sanctions over the invasion of Ukraine. The drumbeat of penalties against Russia continued, as the European Union approved sanctions on some of Russia’s wealthiest tycoons, and Britain told ports not to service Russian-flagged vessels. The government in Kyiv reported that civilians were killed by shelling in the second-largest city Kharkiv as fighting intensified across the nation.